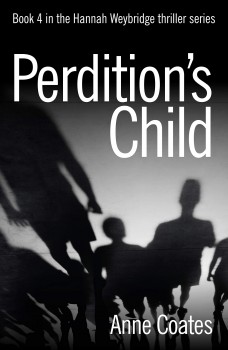 Hannah Weybridge investigates the deaths of Australian men who have come to England to search for lost relatives.

Anne Coates, who likes to use real situations as the  basis for her books, then ask ‘what if’ to formulate the plots, could not have picked a better subject than the scandal of thousands of children sent to a ‘better life’  in Australia in 1946 and 1947 under the corrupt and totally mismanaged Child Migrants Programme.

In Britain, social services and orphanages used the programme as a dumping ground to get rid of ‘socially undesirables’, mostly working-class children, who were lied to about a faraway land of milk and honey where the sun shone 14 hours a day and where they would ride horses to school.

Much of the work was carried out by the Christian Brothers, a Catholic religious community dedicated to teaching disadvantaged youth. The children were registered as war orphans – although many had living relatives who, if they asked, were told the youngsters had died. Once in Australia they were sent to foster homes or Christian Brothers’ schools. Many never learned to read or write and slept on open verandas all year round. They were taught only farm work – and suffered cruelty and hardship including physical, psychological and sexual abuse.

Many died in the poor conditions, became drug addicts or alcoholics or committed suicide. More than 850 children, mostly boys, average age 13, were sexually abused by one or more Christian Brothers, but while the organisation’s leaders knew of the practices, they did not tell police. The story was repeated to a lesser extent in other Commonwealth countries. Both British and Australian governments tried to cover up the scandal but eventually paid compensation to survivors.

Given that background, this fourth of the series of investigative reporter Hannah Weybridge’s adventures should have been an absolute noir blockbuster. Instead it’s an emotional mish-mash of a woman’s magazine short story with a sizeable debt owing to the character of the albino monk Silas, who killed for his ‘Teacher’, in Dan Brown’s The Da Vinci Code.

Investigative journalism? For a so-called national newspaper reporter not to know that Australia does not have a London embassy – the High Commission has been a major landmark on the Strand since it was opened by King George V in 1918 – would lead me to doubt anything they offered!

But then not many I knew spent half their time dining at Simpsons in the Strand or attending posh soirees with their publishers! Hannah is so effortlessly liberal upper middle class, it’s no wonder most of her breakthroughs come as the result of fortunate coincidences.

You’ll also need to have read the previous books to make much sense of characters and places who and which reappear to reveal new secrets in a disjointed manner as Hannah investigates the deaths of  Australian men who have come to England to search for lost relatives in London and Manchester.

In her determined and persistent head-girlish way, single-parent Hannah presses on, despite coming, along with those close her, under increasing threat, as the story builds with an increasingly unbelievable sense of menace towards its climax.