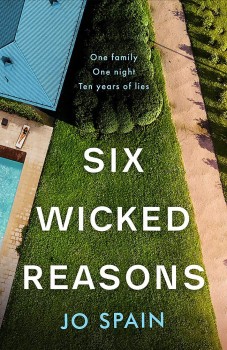 A controlling father is murdered on a yacht party. All of his children, re-united for the occasion to celebrate his intended new marriage, have motives for revenge.

Even by the standards of a large Irish family, where feuds between siblings or with their parents are not exactly unknown, the wealthy Lattimers of County Wexford set a depressing new standard in dysfunctionality. A controlling, narcissistic, near-psychopathic father. A caring, loving mother – the original source of the family’s money – who could never moderate her husband’s vile moods and behaviour, but who is now dead. An eldest son, self-absorbed with his own failure; the depressed, embittered resentful eldest daughter; a lying, self-styling social climber; a self-destructive drug addict; the wild youngest girl; and an independent and rebellious younger brother. That’s some family!

This collection of obsessions and weaknesses provides Jo Spain with a perfect canvas on which to paint another clever and unusual premise offering a brilliant picture and drama of domestic noir.

This pacey and compulsive story of hatred and revenge is crime fiction for grown-ups. She takes her time to explore the ins and outs of human psychology, dissecting her characters’ secrets with scalpel-sharp precision to pull together gradually each piece of a puzzle which will keep you gripped until the end. Her sharp, punchy and energetic writing style, with a fine eye for detail, will drag you into their lives through a brilliant hook. Instantly believable characters and rapid-fire action completely negate the fact almost all of it takes place in two settings, the family home or a police interview room.

Adam Lattimer, aged 21, has vanished, presumed dead. The strain of his disappearance ruptures any cohesion in this already fragile family. Ten years later, with his mother dead and his siblings scattered, Adam turns up unannounced at the family home in Spanish Cove. His siblings return reluctantly as Adam’s reappearance poses more questions than it provides answers to a tangled past.

When father Frazer dies in mysterious circumstances during a party to celebrate his new engagement on board a yacht owned by a family friend, his death is thought it be accidental, but DS Rob Downes – his youngest daughter’s first lover – thinks otherwise. As the investigation builds, it becomes apparent to him that one of the children has planned murderous revenge for the events of ten years ago.

The story is told in both the present through Downes’ investigation and flashbacks from the perspective of each of the siblings, a technique with allows the reader to learn about circumstances which often fail to match appearances and offer compelling reasons for each of them to have plotted their father’s death.

This makes for a suspenseful slow burner which holds interest from start to finish as it highlights their feelings of anger and desire for revenge while building towards a surprising conclusion.

Spain’s characters are hardly likeable. The dreadful Frazer; the beyond-selfish chancer James; and the near-reflexive liar Kate are partly offset by recovering druggie Ryan, Clio, Danny and Adam, but any one of them has justification for wanting their father dead.

The story, another superb and intriguing read from Spain, reminds me of the fly on the wall docudramas so loved by television companies. Readers can always rely on her to twist their minds and this is no exception.