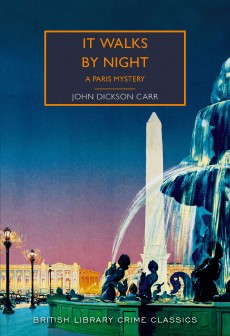 It Walks By Night

Prefect of the Paris city police Henri Bencolin must solve the grisly murder of the Duc de Saligny at a fashionable Parisian gaming house.

This first of more than 80-odd novels from John Dickson Carr, written almost 90 years ago, shows exactly why he became one of the most popular authors of the period, considered a master of the locked room mystery – and also reinforces every myth and legend Americans seem to associate with Paris!

Timely, therefore that the British Library have re-issued this Crime Classics version, the first full-length mystery novel by American Golden Age writer Carr, one of only two of his countrymen to be admitted to the legendary Detection Club.

The action takes place in the 1920s, the opening murder in a locked room in a busy nightclub. It’s set in drug dens, gaming houses and provincial estates, a world away from the city Hemingway and other American expatriates knew. The strong Gothic overtones and air of helpless bewilderment owe much to the influence of Poe, and Carr’s detective Henri Bencolin, strait-laced and obsessive director of the Paris Sûreté and juge d’instruction, seems modelled on his predecessor’s Chevalier C Auguste Dupin.

The central mystery, the decapitation of the Duc de Saligny, a French aristocrat and sporting hero, who was being stalked by an escaped madman, the former husband of the woman he has just wed. Saligny is seen entering a card room watched by detectives. Minutes later he is found beheaded. The atmosphere, built up to heighten a sense of impossibility and vague horror, is combined with a focus on character which gradually turns into a dark study of human nature – and of love and obsession – and is key to solving one part of the mystery.

Overall the story has an identifiable – and pessimistic – message, alongside Carr’s predilection for the shadowy and dreamlike. Like any good mystery, the story, narrated by a wealthy young American Jeff Marle – a poor trans-Atlantic version of Dr Watson – begins quickly, but as the plot thickens, he becomes almost a bystander serving little purpose other than to marvel at Bencolin’s deductive genius.

This often rambling narrative is hardly Carr’s best. It lacks both human feeling and the humour of some of his later work. It is clever and creepy, but the plot is so padded with purple prose, lost-generation-in-Paris atmosphere, the decadent rich, and inaccurate speculation on drugs, that while laying down the future direction and development of Carr’s career, it does little to grip the reader. The usual introduction by Martin Edwards is always worth a read – and there’s a bonus in the shape of one of Carr’s better short stories, The Shadow of the Goat.