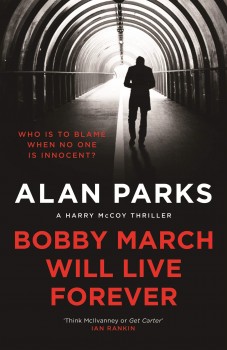 When a young Glasgow girl is abducted, detective Harry McCoy is sidelined by a rival who’s been given charge of the case.

This is the third outing for Harry McCoy, set in Glasgow in the sweltering hot summer of 1973. The police priority is 13-year-old Alice Kelly, taken off the street, but McCoy is not officially involved in the search thanks to Raeburn, a rival who has been given authority in the temporary absence of Murray, the boss.

Raeburn’s animosity means that McCoy’s efforts are directed elsewhere, in particular to a series of bank robberies which Raeburn has conspicuously failed to solve. McCoy is also sent in following the death by overdose in a hotel room of Bobby March, a local lad whose guitar skills once led to an offer to join the Rolling Stones, but whose drug habit undermined his career.

Occasional chapters give excerpts from the life of Bobby March, starting from the dodging of his hostile father to take the train to London followed by other key episodes in his search for musical fame. The author’s experience in the music industry gives this verisimilitude, but in fact the March sub-plot which gives the book its title is of only minor importance.

McCoy maintains links to the investigation to find Alice Kelly via Wattie, a subordinate placed uncomfortably between McCoy and Raeburn. He has also several unofficial or personal tasks to take care of. One of these involves finding Murray’s 15-year-old niece Laura, who has run away from home. McCoy finds she has been seen about with MacRae, a young gangster.

McCoy manages to find Laura, but is uncertain about why she left home. Until he finds out more he decides to have her stay with another gangster, this time an old friend, Cooper. Calling at Cooper’s new home, however, he finds the man deep in a drug binge. McCoy instructs Cooper’s number two Billy to chuck the drugs and get the man cleaned up, and to take a few measures to convince competitors that Cooper is still competent.

By the end of the book McCoy has found answers to most of the puzzles raised, although it has to be said more by luck than any clever detective work. McCoy’s impressive capacity for drink doesn’t impair his thinking much, and by rubbing shoulders with the disreputable he has a pretty good idea what is going on in the less law-abiding side of town.

I have no reason to think this anything but a fair portrayal of the city at the time, with much poverty and hopelessness, over-indulgence in drink, cynical violence of the most horrific kind, and attitudes to women which are not edifying. McCoy is a likeable exception, apart from the liking for drink, if perhaps a little too good to survive in the environment depicted.

It struck me again how authors of books set in Glasgow have to adapt the speech they report for the benefit of outsiders. Parks has done very well to convey something of the flavour of the local patois, while the real thing would no doubt leave us scratching our heads.