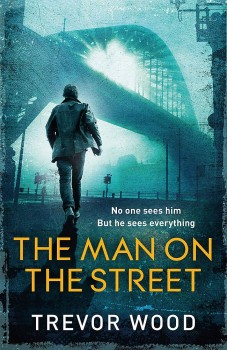 The Man on the Street

When a homeless man sees the report of a woman’s search for her missing father, he thinks he might have been the only witness to a possible murder. The police don’t seem very interested in what he has to say, but the man’s daughter is desperate for help, so against his better judgment, Jimmy Mullen gets involved.

Jimmy Mullen is a homeless Falkland War veteran living on the streets of Newcastle. He’s lying low one night near the docks when he hears two men arguing, Jimmy repeats the mantra in his head that it’s not his fight, then there’s a dragging sound followed by a splash, and only one man walks away. When the man’s gone, Jimmy looks into the river but can’t see anything.

Three weeks later, Jimmy is in the library with his friend Gadge, when he sees a newspaper report of a man who went missing three weeks ago. The man, Roger Carpenter, an environmental campaigner and part-time lecturer, was supposed to meet his daughter Carrie for a drink, but he never turned up. She’s desperate to find her father.

As close as Jimmy can remember, the date coincides with when he heard the altercation by the river. Against all his instincts, using the computer in the library, Jimmy contacts Carrie on Facebook. At that point, what little Jimmy has left in life starts to unravel.

Trevor Wood’s debut, The Man on the Street, takes a penetrating look at life on the streets and shines an uncompromising spotlight on the plight of army veterans, in many cases suffering from serious post-traumatic stress disorder, forced into homelessness as neither they nor their families are mentally equipped to cope with the fall-out of what they’ve been through on active service.

Jimmy’s constant companion is a small mongrel just called Dog (yes, I did very rapidly take a peek at the last few pages to determine whether I carried on reading!), and his only two friends are conspiracy theorist Gadge (short for Gadget) and Deano. None of them have any cause to trust the police and it gradually emerges that Jimmy has spent a lengthy period in prison. He has no desire to end up back there and soon starts to wish that he’d never made contact with Carrie or got involved with the mystery of her father’s disappearance.

If you’re tempted to walk past anyone sleeping rough without sparing any money, The Man on the Street might cause you to think again. The book is a painful social commentary as well as being a gripping crime novel. There’s a huge power imbalance every time Jimmy deals with anyone in authority, but despite that, he gradually builds a tentative rapport with harassed copper DS Burns, the only person who appears to be taking any interest in Carrie’s search and Jimmy’s story.

The clues are well buried and there’s nothing predictable about Trevor Wood’s debut. The book is gritty, troubling and engaging in equal measure. I had huge sympathy for Jimmy, despite the gradual reveals about his time in prison, and liked his interactions with Carrie. Albeit reluctantly, Jimmy comes to work as a team with her. There’s no romance there, she’s young enough to be the daughter he never got the chance to know as she was growing up, but there is a spark of friendship that starts to grow, despite setbacks.

Trevor Wood has written an impressive debut novel, and proves himself very capable of looking below the surface to produce a darkly interesting and engaging thriller. The reveal, when it finally came, wasn’t at all what I’d expected.