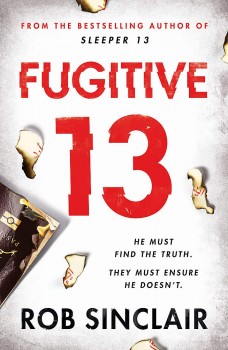 Aydin Torkal has spent a year on the run from western intelligence and the brotherhood of jihadi insurgents he betrayed. MI6 agent Rachel Cox, probably the only person who believes him an ally in the war on terror, receives a coded message from him warning her not to trust her own colleagues and must choose between her career and the truth.

Sleeper 13, Aydin Torkal, determined on revenge on those who destroyed his childhood and his family, has spent a year on the run from the western intelligence agencies – and the brotherhood of ISIS jihadi insurgents he betrayed. MI6 agent Rachel Cox may be the only person who believes he is an ally in the war on terror. So when she receives a coded message from him warning her not to trust her own colleagues, she must decide whether her faith in him is justified and face a choice between her career and the truth.

Amid a hail of bombs and bullets, car chases and escapes over rooftops, gunshot and stab wounds, the seemingly indestructible Aydin – he must have a constitution which makes your average SAS trooper look like a couch potato – pursues his main aim, to track down those responsible for his horrendous childhood in an Isis training camp ‘The Farm’. Taken there from a happy family life in the UK by his own father, he and other young men were brutalised, taking part in and and witnessing horrific levels of violence as they were molded into elite insurgents.

On the surface, the story pits Islamic terrorists against British intelligence – a simple evil v good plot. But Sinclair introduces so much fashionable confusion, questionable moral choices and mixed motives in his SIS characters that in a disheartening way their behaviour and methods are often disturbingly similar to the terrorists.

As Aydin searches for answers about his past in a fog of lies, deceit and betrayal, it begins to appear that the truth may be closer to home than he expects. At the same time, Rachel, who in this story takes pretty much of a back seat amid a sea of ambiguity and unpredictability in her own agency, and Aydin’s sister Nilay, who has embarked on her own search for her missing father and brother, pursue their own lines of inquiry. These storylines, running alongside each other and Aydin’s current activities, give a bulk and momentum to a plot which to a certain extent is predictable.

The main focus of interest in a complex, twisting and none-too-realistic episode is to eventually expose the enemy within and their agenda. The sequences involving the power games within SIS (MI6) seem particularly strained and overly forced. We all know different factions within such organisations constantly promote their own interests, but this seems to be hinting at treason.

The story line is totally unbelievable, but OK enough for an audience used to the improbabilities of TV and Hollywood. It is certainly pacy and quite horrifically violent, and the issue of global terrorism is very relevant and rarely out of today headlines. But it is just all too detailed and gave me the distinct impression Sinclair is trying too hard to tell readers how much he knows about terrorism, ISIS or the multiplicity of locations the story covers.