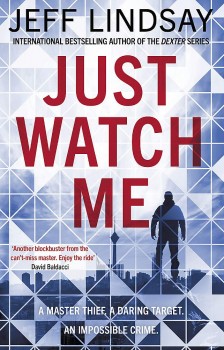 Master thief Riley Wolfe has his sights set on a prize beyond price, the centrepiece of the Iranian crown jewels, but FBI agent Frank Delgado is determined to stop him.

Riley Wolfe is a firm believer that where there’s a will, there’s a way. He’s a thief, and a good one, targeting the possessions of the very rich, relieving them of their valuables without a qualm. He likes a challenge, and when he discovers that the Crown Jewels of Iran are coming to the US to the Eberhardt museum it’s a challenge he can’t resist, despite the state of the art electronic security, the elite private military contractors and even the feared Iranian Revolutionary Guards.

Wolfe has set his sights on the centrepiece of the jewel collection, the Daryayeh-E-Noor, known as the Ocean of Light, the largest pink diamond in the world. He enlists the help of master art forger Monique, certain that with her help he can pull off the most audacious heist of all time.

But one man is determined to stop him. FBI Agent Frank Delgado has been on Riley Wolfe’s trail for a while. He’s certain he knows what makes Wolfe tick and knows that he’ll find the Ocean of Light impossible to resist. When his bosses don’t have the same priorities, Delgado simply takes his accrued leave and continues his pursuit in his own time.

Jeff Lindsay, author of the Dexter series, has created another anti-hero, a man with no discernible morals who’s happy to lie, steal and even kill in pursuit of his aims. He’s clever, able to bypass alarm systems with consummate ease, and assume all manner of disguises and personalities like a seasoned actor. His methods are audacious, and he knows when to play a long game.

I’ve got a long-standing interest in the dark side of the art world with its thriving trade in stolen treasurers, so the idea of a book focussing on a daring theft of such an iconic gem was appealing. The stone does exist, although Lindsay uses a non-standard spelling, and a quick internet search will show you what it looks like. It’s certainly a prime piece of bling, and anyone who’s ever done a few turns around the Crown Jewels in the Tower of London will immediately understand the attraction.

Unfortunately, I didn’t find the character of Riley Wolfe anywhere near as attractive as the object of his desire, even though book bad boys are usually my bag. It took a while to put my finger on the problem, but ultimately, it came down to an excess of tell over show. Lindsay makes a big deal of telling us how ingenious Wolfe is, starting when he was only a kid, but although we’re told about how Wolfe pulled off an impossible feat of climbing down into a dangerous quarry to remove a piece from a wrecked car at the bottom, succeeding against all the odds, we never get an explanation of how he did it, so I ended up feeling vaguely cheated by his success, wanting to know how he did it, but that’s not something we ever learn.

The set-up for the heist is clever but requires rather too much suspension of disbelief for my taste, and there were times when Lindsay was overly generous with the stupid stick, clubbing some key characters around the head with it for the sake of the plot. There were large elements of the central plan that we simply had to take his word for. My mind was clamouring for detail at the crucial points and my feelings of being cheated only intensified.

Wolfe never succeeded in winning me over. He’s cold, amoral, too quick to kill in pursuit of his objectives and largely lacking in charm. My sympathies lay more with the dogged Delgado than they did with Wolfe. This is billed as the start of a new series, but I’m not sure I’ll be tempted back, although the thought of seeing him get his come-uppance is attractive, but somehow that doesn’t strike me as likely to happen any time soon.