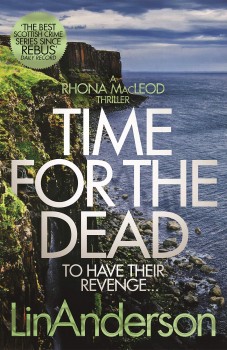 Time For the Dead

Forensic scientist Rhona MacLeod takes a much-needed break on Skye, but soon finds herself caught up in an unexpected investigation.

Forensic scientist Rhona MacLeod is taking a break from work following a traumatic experience on the last major investigation she was caught up in with her friend DS Michael McNab. A friend’s cottage on Skye was intended to provide some sanctuary, but trouble tends to follow Rhona around.

On a visit to a nearby outdoor activity centre she comes across a scene in the woods that concerns her, with blood on a tree. The centre has recently hosted a group of army medics on leave, who were involved in some team bonding and playing a less lethal type of wargame. Rhona wonders if the scene in the woods could be connected with them, and starts to make some enquiries, working with the help of ace search and rescue dog, Blaze.

Yep, guess who spent the entire book worrying about the dog. *Raises hand in the air*

I’ve been a sporadic follower of the series for a while, but with the previous book, Sins of the Dead, I had to exist on a few crumbs of backstory tossed out to explain why Rhona felt the need to cut herself off from her friends and colleagues. On this occasion, I felt it would have helped to know more, despite the risk of spoiling the book for anyone reading out of order. Once I’d got past that, though, I was soon sucked into a vivid description of Skye in winter – bleak but beautiful, with the mountains ready to claim the unwary for their own.

As ever, the investigations were thorough and detailed, but never conveyed in info dumps, which is a definite bonus. I liked the varied collection of characters, from the owner of the outdoor pursuits centre to the local undertaker, who’s also a member of the mountain rescue team. There’s a very real sense of everyone knowing everybody’s business that’s so true of country life everywhere, and here it’s magnified tenfold by the island setting.

The main story is interspersed with a series of flashbacks to the medics’ time in Afghanistan. At first it was hard to see how these fitted in, and of course I got distracted worrying about another dog! I was starting to feel Lin Anderson had it in for me by then. The flashbacks are told by a woman nicknamed Seven by one of her team (based on her attractiveness score, and yes, I did put that rather more euphemistically than the book did!) and become a story in their own right, shining a light on the conditions in Afghanistan and the dangers to service personnel there.

Anderson tells a good story. The plot is complex and the denouement is chilling. The characters come over as real people, and it was good to catch up with maverick cop McNab and Rhona’s cheerful colleague Chrissy. Blaze is something of a cross between Lassie and K9, and there was an element of schmaltz here that felt a little overplayed at times. Never work with children or animals came to mind in places! Time for the Dead is a good addition to the series and definitely made me want to catch up with the previous book, so I can join a few more dots in Rhona’s extensive and entertaining career.