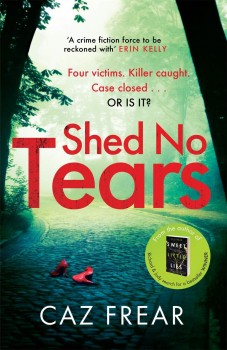 When an old murder case is reopened, Cat Kinsella soon develops doubts about the key witness, but when she delves into the past, she’s unprepared for the hornets’ nest she’s just stirred up.

DC Cat Kinsella and her colleagues on the murder investigation team, DS Luigi Parnell and DC Ed Navarro, have been dispatched to a muddy field in the wilds of Cambridgeshire to look at the site where a young woman’s body has been found. Holly Kemp was always thought to have been one of the victims of serial killer Christopher Masters, even though he’d never been convicted of her murder, and had alternated between confessing to and denying killing her, and as Masters was stabbed to death in prison, it was believed that he’d taken the truth about her death to his grave.

With a body, the murder investigation into her death has taken off again, with two obvious puzzles to come to grips with. The first is why Holly’s body was concealed in a ditch under a pile of logs, a long way from the last eyewitness sighting of her in London. The second is that she was shot in the head, rather than being strangled, an MO that definitely doesn’t fit with her presumed killer’s behaviour. But against that is the strong eyewitness testimony from a woman who saw Holly going into Masters’ house, and that’s enough to place Holly Kemp on the list of Masters’ victims.

Cat’s boss, the tough, acerbic DCI Kate Steel, is tasked with the re-investigation of Holly Kemp’s death, going over the same ground that her friend and colleague DCI Tessa Dyer did when she was a DI heading the investigation into Masters and his victims. Dyer comes over as a charismatic woman, seemingly unconcerned about having one of her early career-making cases put under the microscope again. The only problem is that the further the reinvestigation progresses, the more Cat becomes sure that there was a flaw in the original detective work and that the key witness – and Dyer – has something to hide.

In DC Cat Kinsella’s third outing, she does a very good impression of a dog with a bone as she worries at it and digs the ground in her determination to shake the seemingly unshakeable witness who is still, several years later, word-perfect in her testimony, claiming that she did indeed see the murdered woman at what the press dubbed the House of Horrors where the other women were killed. Cat thinks there’s something off about the woman and isn’t willing to let it go.

At the same time, Cat is also angsting about her private life. She’s dating the brother of a murdered woman with links to Cat’s father, she’s turning a blind eye to her father’s association with a criminal, and can’t decide whether she wants to follow her boyfriend as he takes up a two-year posting to New York.

The thing I like about Cat, though, is that her emotional baggage isn’t all that defines her. She’s also an intuitive and determined police officer who will go where the evidence leads her, even if her instincts look like pitting her against the seemingly indomitable DCI Dyer. There’s a distinct father-daughter vibe about her relationship with colleague DS Lu Parnell, and in general, the murder team come over as a likable bunch, even though most of them never really come to the forefront – nor are they needed in that role. Centre stage most of the times goes to Cat and Parnell, with DCI Steele striding on and hogging the limelight every so often.

The relationship between the two women is complex, but never antagonistic. Steele is willing to listen to her protégée’s hypotheses even when they stray into very uncomfortable directions, such as the past played in the previous investigation by Steele’s former mentor and boss, now retired, the equally charismatic and attractive former Chief Superintendent Olly Cairns.

Frear spins a complex, clever web and as the past starts to collide messily with the present, the book gathers pace on all fronts, with Cat struggling to keep her private life in the background while she delves deeper into the life and death of Holly Kemp, a woman every bit as complex as Cat herself. This is a quality police procedural, with an engaging main character.