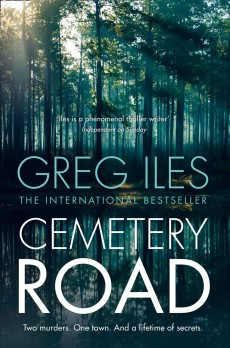 Journalist Marshall McEwan returns to Bienville, Mississippi, where he fights local corruption while revisiting the scenes of his youth which impelled him to move away.

Bienville on the bank of the mighty Mississippi is a city in decline, its business dominated by the ‘poker club’, a sinister cabal of financiers, developers and lawyers. The club have engineered a major deal with the Chinese for a new paper mill, a development which will add to their wealth as well as bringing jobs and benefits to the whole town.

The protagonist Marshall McEwan was brought up in Bienville, where his father owns and runs the Watchman, the local paper. McEwan, who is estranged from his father after a teenage escapade that killed his elder brother Adam, carved out a journalistic career in Washington, becoming a multiple Pulitzer prize-winner. He returns to Bienville when his father’s illness looks to be terminal and takes control of the newspaper.

The book begins with a murder, the cynical killing of Ferris, an archaeologist who believes important relics of an ancient Indian civilisation exist under the paper mill site. McEwan’s fight against the attempts of the poker club to have the death declared an accident soon extend to their corrupt activities generally. His efforts threaten to derail the paper mill project and bring general dislike. While he recognises the boost to the area the new mill will bring he is determined to make the poker club pay a price.

The contemporary tale is filled out with substantial pieces of backstory about McEwan’s childhood and his life up to the present, when he is in his mid-40s. His teenage relationship with local beauty Jet was broken when he moved away; Jet subsequently married Paul, whose father Max is a poker club member. The marriage is in trouble and McEwan and Jet have resumed their liaison.

This affair is problematic, not least because McEwan and Paul were childhood friends and Paul once saved McEwan’s life during an incident in Iraq. Paul has physical and psychological injuries from his service and his military skills and mental instability constitute a significant risk if he should become aware that his wife and friend are cheating on him.

After many pages about McEwan and his life, his ruminations about his youth, with digressions into the complexities of family and romantic relationships, we come to understand the man and the setting quite well. These sections are interesting enough for the reader to forgive the interruption in the action, and certainly add depth and solidity to the characters.

At any event, the 600-plus pages are well paced and do not drag, with enough mysteries to keep the reader guessing. Chief among these is of course how McEwan is going to be able to compel such a powerful group as the poker club to surrender some of their ill-gotten gains and leave him alive at the end of it. A satisfactory but chilling bit of realpolitik brings this rather disturbing exploration of the deep south to a thrilling conclusion.