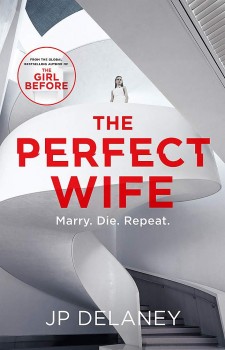 When Abbie Cullen disappears from her Californian beach house and is never seen again, her husband Tim is cleared of any involvement. But when, five years later, he brings her back to life in robotic form the old doubts soon resurface.

The Perfect Wife is set in Silicon Valley and revolves round British-born Tim, an egotistical genius with a passion for robots – the type of robots who can act as shop assistants, help old ladies across the road and generally do a passable imitation of being human. When Abbie, the love of his life goes missing, presumed dead, then Tim sets about creating a 'cobot' (companion robot) to replace her.

He creates a perfect physical reproduction programmed with Abbie's personal history, social media exchanges and texts so that it is almost as if 'she' has a mind of her own. Installed in Tim's luxury San Francisco mansion cobot Abbie begins to find evidence that Tim's perfect marriage might not have been as idyllic as at first presented. And she sets out to discover the truth about her predecessor's disappearance.

Normally anything to do with robots or artificial intelligence would be a 'no' from me from page one. However, I persevered with this and was rewarded with a clever morality tale. The story grabs you from the start as it's told primarily from the point of view of cobot Abbie as she comes to life (or receives her final upload) in a private Californian clinic. Her progress is interwoven with the back story of Tim Scott's sensational success as the founder of one of the world's foremost tech companies and his unlikely wooing of bohemian artist Abbie Cullen.

The pace is very fast and chopped up into very short chapters often with a cliff-hanging final sentence – so a real page-turner. And there's a compelling sub-plot in that Abbie and Tim have a much-loved son who at the age of four develops a very rare form of autism which strikes him down almost overnight. What happens to the little boy on his 'mother's' return is one of the more interesting themes and kept me hooked right until the very end, an ending in which he plays a vital role.

There are some very beguiling descriptions of the lavish lifestyle of the Californian super-rich. A courtship where a typical date is a sky-diving excursion in a private jet. An engagement set against the backdrop of the Taj Mahal. A wedding gift of a multi-million dollar architect-designed beach house. Money is no object here. This could all be seen as a bit silly and Valley of the Dollsish but the story does raise some interesting questions.

Abbie the cobot is not about sex – she has been designed to be curiously sexless.... so what purpose has she been created for? It remains to be seen whether she can she begin to think for herself and outsmart those who would wish to destroy her, and the question arises whether creations like Abbie are the answer to the quest for eternal life.

Not all of these open-ended questions are answered within these pages but it was fun to contemplate them. There is a satisfying ending where we see examples of both robotic self-sacrifice and robotic self-preservation. The Perfect Wife is an interesting read that has almost converted me ...