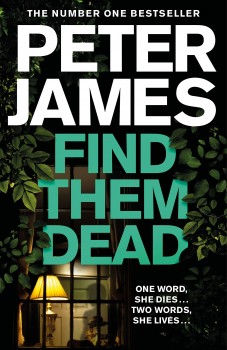 A seemingly pillar of the community solicitor is up in court on a drug-dealing charge, but he will stop at nothing to ensure he’s found not guilty

My usual summer routine – trekking around the UK for work meetings – has been curtailed by Covid-19. So instead of inhaling the new Peter James book on a train, I read it in bed. But this time it took substantially longer than the three hours there and back to Leicester.

James, a consummate storyteller, is 16 books into his Roy Grace series. It’s one of a select few series that still engages me, alongside those by Elly Griffiths, Martin Walker and Phil Rickman. He’s trying something a tad different in Find Them Dead. I’m not entirely sure that it worked.

Central to the series is Detective Superintendent Roy Grace, a no-nonsense and dogged cop, supported by a thoroughly capable team, including his best mate DI Glenn Branson. What it boils down to this time out, though, is that there’s nowhere near enough of the police team and too much attention paid to characters in whom it’s difficult to get invested.

The main plot thread is focused on a court case. A seemingly mild-mannered pillar of the community solicitor is charged with drugs dealing after a classic car being brought into the UK is found to be stacked to the gunnels with illegal substances. The accused, though, will stop at nothing to be found not guilty, and that includes jury nobbling.

In many ways Meg Magellan is the central character in Find Them Dead. She’s a widow whose teenage daughter is off travelling in South America for her gap year with her best friend. And 18-year-old Laura becomes the pawn as Meg is called for jury service – and it’s made clear to her that she must ensure the jury returns a not guilty verdict if she wants to see her daughter again.

Meg’s certainly not a lightweight character and she does her best to carry the book. But while Grace and his team flit in and out, nothing quite dovetails – it’s like sprinters in different lanes. James is juggling a stack of angles alongside the court case – the murder of the brother of one of the witnesses, Roy’s recent return from a secondment to the Met, his not quite as idyllic as it seems private life with bizarre son Bruno on the scene, the pending trial of an old adversary, and the machinations of smarmy ACC Cassian Pewe.

My biggest issue with Find Them Dead is the ending. I don’t expect everything to be resolved neatly at the end of a book – real life doesn’t work like that. But there are so many loose ends left hanging that it was a dead ringer for one of my school sewing class efforts. I did feel distinctly cheated at the end.

If you like courtroom dramas, then Find Them Dead may work better for you than it did for me. But while I enjoyed appearances from familiar faces such as acting DI Norman Potting – a character who James has skilfully turned from a figure of fun into an impressive operator – I wanted more of what the author excels at. And that’s rigorous police procedurals.