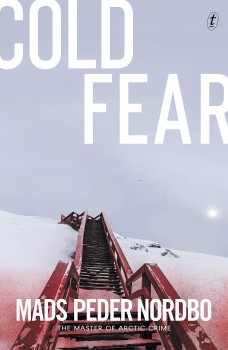 Danish journalist Matthew Cave is in Nuuk, Greenland’s capital. Faced with the disappearance of his half-sister Arnaq and a murder inquiry that might have involved his father Tom, he finds himself in a strange search for the killers across the vast frozen land.

Mads Peder Nordbo’s Cold Fear follows his chilling debut The Girl Without Skin, and as well as bringing characters featured earlier it expands the vast physical world of frozen Greenland and introduces new people to the sparsely populated land. The Danish journalist Matthew Cave again remains in the centre of a new mystery which weaves threads from his personal life and the events from the past of the locals living in the harsh Arctic landscape.
This novel, superbly translated by Charlotte Barslund, combines tense, gripping storytelling and a plot that tightly links fact and fiction, and as a result makes a damn good thrilling read, full of blood, menace and incomprehensible thinking shaped by the unforgiving climate and religious dogma. Some of the motives seem absurd but are perfectly suited for this compelling, vivid and heart-breaking search for truth.
Reeling from the death of his wife and unborn child in a car accident several months earlier, followed by gory and vicious murders two months later, Matthew tries to lead a normal life. Yet the disappearance of his half-sister Arnaq during a hiking trip with three Danish friends throws him back into the chaos of fear. At the same time, he receives a letter from their apparently dead father Tom, asking him to come to a remote isolated place on the other side of the country.
As a young US soldier stationed in Greenland, and a chemist to boot, Tom took part in a secret experiment to test the ability of the human body to withstand cold. The side-effects of the newly invented pills were shocking, and the experiment ended with several deaths. Accused of murder, Tom was forced into hiding and coerced to use his skills again, while trapped somewhere in some weird concrete labyrinth.
Matthew has been searching for his father all his adult life, and now faced with the possibility that he might be alive and a murderer on the run, he accepts help from Tupaarnaq, a young Inuit woman, damaged by own family and destroyed by the system.
The contrast between these two is very well portrayed, and throughout the whole story there is a lingering doubt as to whether Tupaarnaq has her own agenda when looking for justice and planning to kill men who had abused her and other women. Add to the mix a modern-day Minotaur keeping his prisoners underground in an abandoned fishing port of Faroese origin, the police struggling with the increasing body count and political scheming, and you become addicted to reaching for an atlas, and checking what’s behind your back.
Nordbo writes with passion and understanding and as the outsider that he is of course, coming from Denmark. Geographical and historical details enhance the overwhelming sense of strange claustrophobia. Through the main character’s eyes, Nordbo observes the old customs and habits of the closed community, the brutal ways of living and the surfacing power struggles between America and other superpowers that want to have control over this huge island.