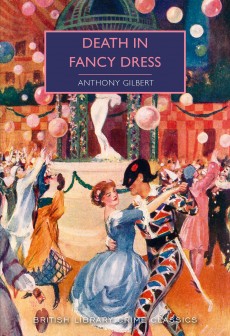 The dissolute Sir Ralph Feltham is murdered at a fancy-dress ball at his former home Feltham Abbey. Lawyer Tony Keith and his adventurer schoolfriend Jeremy Freyne, there to look at possible links to a blackmail ring, investigate.

This is the second of the books of the much under-rated Lucy Beatrice Malleson, who also wrote as Anne Meredith and J Kilmeny (a pun on ‘kill many’) Keith to be re-issued by the British Library.

Despite various guises to hide both her real identity and sex, she is perhaps best known for the Arthur Crook detective series, under the Anthony Gilbert name. Although a well thought-of member of the elite Detection Club – Dorothy L. Sayers was one of her most ardent supporters – her work has long been out of print.

This re-issue of a slightly unorthodox, but nevertheless classic whodunit from 1933 features what many critics consider to be one of her best stories along with ‘Meredith’s’ Portrait of a Murderer, republished last year. This mystery is in a very different vein, much more a classic country house murder, but with the twist ending which readers of Malleson have come to expect.

It is a story that reflects the demands of an age when readers seemed to want nothing more than to be entertained by the splendours, frivolities and shortcomings of the English upper classes, with occasional references to the sombre hang-over of the First World War and the Great Depression, mixed with the irresistible complications of often deadly familial relationships.

This fascinating if morally ambiguous study, plus a little amateur detection, is actually a great critique of 1930s upper class society, some intentional – some more inadvertent. It is narrated by the privileged, but slightly wimpish, young lawyer Tony Keith, who with his equally privileged adventurer schoolfriend Jeremy Freyne, return from a chance meeting in India to be dispatched to Feltham Abbey by Home Office mandarin Edward Philpotts, whose secretive department is investigating a large-scale blackmail ring which has led to several prominent suicides and may be linked to a case of wartime treason.

Philpotts already has an inside man at the Abbey, former wartime secret service agent Arthur Dennis, now an unspecified Foreign Office employee, who has also become engaged to the reckless, flirtatious and attractive socialite daughter of the house Hilary – a girl Freyne has convinced himself he is going to marry. Keith has also been summoned by his aunt, Eleanor Nunn, whose first husband Percy Feltham committed suicide under suspicious circumstances towards the end of the war, and who warns of a ghastly happening at the ancient house.

Events centre on a fancy-dress ball at the country residence where the dissolute and dastardly Sir Ralph Feltham, the real owner of the property and who has been exercising a baleful influence on Hilary, is found dead in a garden pond. A bewildered Keith sets out to make sense of the night’s activities, their causes and the motives of the other guests.

It’s not the strongest plot. There is very little serious investigation and the denouement seems both a little rushed and weak. But Malleson is, as always, strong on characterisation, although some of her personalities are either rather too bland or merely silly and unpleasant. What she succeeds at best is building an atmosphere of menace and dread set against a background of frivolity and celebration with her depiction of Hilary’s ball costume of vivid silk pyjamas and accompanying teddy bear a fine example.

As well as the usual informative introduction from series editor Martin Edwards, as a bonus this edition also contains two of Malleson’s better short stories, Horseshoes For Luck and The Cockroach and The Tortoise. It is quite sad to realise that her work made her so little money at the time. The re-issue of Portrait of a Murderer sold far more copies than the original and I suspect this will do the same for a vastly under-rated author who captures the spirit and feeling of the Golden Age so well.