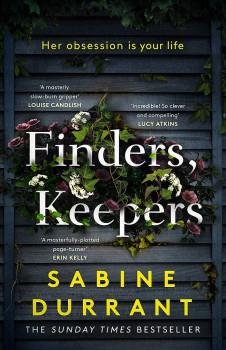 Verity Ann Baxter tells the story of her developing relationship with new neighbours Ailsa, Tom and family. It is a love-hate relationship, as Verity and Ailsa become more and more involved in each other’s lives.  But who is guilty of Tom’s murder?

Verity Ann Baxter has lived in her London house all her life. Now on her own, apart from her little dog, Maudie, she has time to engage in the rescue of things that other people throw out, often perfectly good, just surplus to requirements. But where to put them? The garden is already overgrown and the house over-full.

Major improvements have been going on next door for ages, and at last one day, new neighbours Ailsa, Tom and family appear. It doesn’t take long for Ailsa to see Verity’s problem and to offer to help her have a clear-out. Tom’s increasingly negative comments about the state of the garden add to the pressure.

Verity has a chance to pay Ailsa back for her help by coaching her dyslexic and under-confident son Max in his English. It soon becomes apparent that Ailsa is currently living with Verity, pending Ailsa’s court case for the murder of Tom. The story is told slowly by Verity, how she and Ailsa gradually found out more and more about each other.

At the start of each chapter two pieces of information are provided. Firstly, there is an item, such as ‘Four 10g sachets of Heinz tartare sauce’ or ‘Karrimor grey and blue waterproof hiking trainers, size 6’. Secondly, there is the definition of a word such as ‘homeless’ or ‘nocturnal’. Although Verity’s job is to do with the meanings of words, this word at the start of each chapter doesn’t necessarily appear to belong to the ones she has been given to work on, nor does it relate to the content of the chapter itself.

For example, in chapter 13 the word is ‘surreptitious’ and yet nothing happens that is more or less surreptitious than in any other chapter. These definitions are interesting in themselves, but their purpose in the text is unclear. Similarly, the item also given at the start of each chapter may relate to something that Verity collects, as is the case when the item is “blue mohair wool, loose” but on the whole there appears to be no obvious link and they are not mentioned again.

In general, the prose is very rich, full of description and analysis of character, and yet never boring. The nature and amount of emotion conveyed in some places is exceptional. Verity, in particular, comes to life, as she continues, in her methodical manner, to tell the story. Although nothing really seems to happen, Verity’s reflections are so full and thoughtful that they provide compulsive reading. Much of Verity’s background comes to light whereas Ailsa’s is kept hidden until the last minute. The culprit as far as Tom’s death is concerned may be guessed some time before the end and yet the outcome is fully justified by Verity.

So this is a gentle, thoughtful read with no big build-ups, nor any surprises – good for a summer holiday read, perhaps.