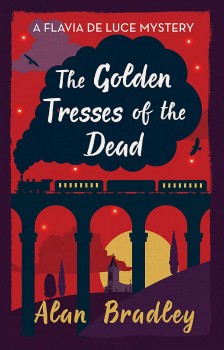 The Golden Tresses of the Dead

When a finger is found in her sister’s wedding cake, young sleuth Flavia de Luce is determined to identify its erstwhile owner.

Flavia de Luce finally gets to see one of her older sisters married. Not because she’s sentimental – I don’t think the girl has a sentimental bone in her young body – but because she’s just pleased to have finally palmed off a long-term opponent onto someone else and got a bit more of Buckshaw, the sprawling, crumbling family home, to herself. Ophelia, more usually known as Feely, is finally marrying Dieter and the wedding is just perfect – until a finger turns up in the wedding cake, causing the bride to have a major and wholly understandable meltdown at the reception.

With the calm I’ve come to associate with our 12-year-old heroine, Flavia whisks the finger away for further investigation and, together with the ever-loyal and equally unflappable Arthur Dogger, the de Luce family’s faithful retainer, she promptly takes charge of the hysterical Feely and does her best to cover up the presence of the finger. Tracking down its erstwhile owner is uppermost in Flavia’s mind and, with Dogger at her side, she embarks on one of her usual forensic investigations, starting with the fact that the flesh of the finger bears the unmistakeable indentation of a wedding ring. The hunt is on …

This is my fifth Flavia de Luce book. The series now runs to 11 novels and one short story collection. I didn’t know what to make of them at first, and I’m still not sure whether they’re aimed at an audience of a similar age to our young protagonist, for whom time passes as slowly as it did for Timmy the dog and his friends in the world of the Famous Five, or whether they are aimed at an adult market who are expected to find Flavia as charming as she is clever. And don’t get me wrong, she’s very much charming and clever, but she also has a ruthless streak and a vein of sarcasm as wide and deep as the Grand Canyon.

The world of post-war rural southern England comes over as a cross between Pride and Prejudice and Midsomer Murders. You can hear the thwack of leather cricket balls against willow bats as men dressed in white romp around the village green, and also smell the overgrown garden at Buckshaw and revel in its faded grandeur. You can also admire Flavia’s flytrap mind for everything chemical, particularly if it relates to the means of killing people.

There’s a slight and regrettable tendency in this book to reduce the redoubtable Dogger to little more than a means to jogging Flavia’s memory and acting as an inexhaustible series of small – and always fascinating – info dumps. Dogger deserves more than that. I also detected the merest hint of a mild flirtation between the two, which their creator will need to be careful of unless he intends to advance Flavia’s age considerably and quickly. But maybe he’ll deal with that by means of bringing in Flavia’s young relative, Undine, who wouldn’t have been out of place in the Fourth Form at St Trinian’s and could be a successor to our young heroine.

The plot is as fiendishly clever as ever, but never so complex as to get in the way of the simple pleasure of revelling in the inventiveness of Flavia’s internal monologues. I’ll long treasure the phrase, “I don’t give a rat’s rompers for…” [insert thing/person of choice]. That deserves as wide an audience as possible, as do Flavia, Dogger and Undine.