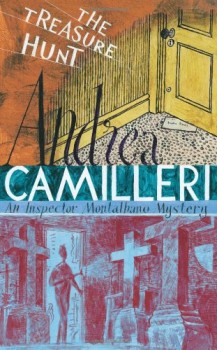 Inspector Montalbano is short of work – so when a friend asks if a young student might study the inspector’s methods of solving crimes the inspector feels he has no option but to agree. Subsequently he enlists the young student’s help when the crime rate starts to pick up.

An elderly couple start shooting into the street from the balcony of their apartment. Inspector Montalbano discovers some things in their apartment that disturb him. While he is dealing with this problem he receives a communication that appears to invite him to take part in a treasure hunt. He begins to follow up clues that he receives and is mystified and shocked by what he finds.

Also with little or no other criminal activity to investigate, the inspector is asked by a friend to help a young student who wishes to study the way in which Montalbano’s brain goes about solving crimes. He reluctantly agrees to meet the student and eventually shares the treasure hunt affair with him to see whether he can shed any light on the matter. In due course the crime rate begins to pick up; for example a car is stolen, and a girl disappears. Throughout this the clues to the treasure hunt keep appearing.

One of the reasons why the Inspector Montalbano mysteries are so popular may be due to the way in which the writing conjures up the atmosphere of a quintessential Italian way of life in the provinces – the slower, more laisse-faire approach to living; the importance of family; the centrality of food; the forgotten and run-down parts of the countryside; the feel of a still very patriarchal society, and yet the feeling of attractiveness of all this. The author’s voice appears to come through very strongly in places with an almost self-deprecating sense of humour, but this humour also oscillates between black, and even slapstick on occasions. The attempt at a stereotypical country accent for one of the characters however ceases to amuse after a while.

Despite the relaxed atmosphere, there is never a dull moment in the book, although the pace picks up particularly when the first clue arrives. It is then maintained by the thread of the treasure hunt running through the rest of the story which builds to a simple climax. It is a shame that there isn’t more to challenge the reader here. In fact, the one-dimensional nature of the story can be disappointing at times. The focus is almost totally on Montalbano’s thoughts and actions. The other characters are sadly lacking in depth, and consequently there is no real fear or suspense and indeed it sometimes feels like a book written for children, especially printed as it is with the clear upright typeface and the spacious layout.

For a good relaxing read that doesn’t require much thought, the book is a good choice that will transport the reader to an imaginary Sicily. The Treasure Hunt is well written and carefully planned.