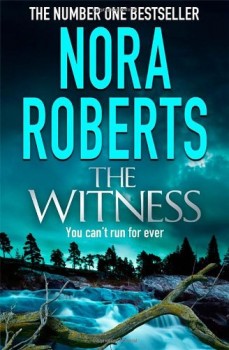 As a teenager, Abigail was witness to a brutal mafia double murder and the killing of two US marshals. She has been on the run from the killers for twelve years. Now she believes she is finally safe and has settled in a small town in the Ozarks. Then she meets the local chief of police – and her whole life changes.

Two hundred books, and New York Times bestseller Norah Roberts has made a career and a fortune from combining the best of Mills and Boon with taut, believable crime and healthy doses of modern technology – either under her own name or in her futuristic series under the name of JD Robb.

Romance is always at the heart of her novels – and The Witness will do nothing to halt her success. An up-to-the-minute plot worthy of a top thriller, thoroughly enchanting characters, great sense of place, clever action and even a happy ending make this a book for everyone regardless of sex, bar the most cynical.

Elizabeth Fitch is a 16-year-old genius, created and controlled by her brilliant and fiercely ambitious mother. One moment of teenage rebellion leads her to disaster, witness to a double killing by the Russian mafia. She is put into the witness protection programme, and discovers at first hand the reach of a major criminal organisation as two US marshals assigned to look after her are killed. But she escapes to go into hiding for the next 12 years, using her formidable intellect to create a series of new identities and businesses.

Finally settled in the Arkansas Ozark mountains under yet another name as Abigail, she believes she is both safe and content until she meets local police chief Brooks Gleason. He is a plain nice guy, with a nice family, a nice job and who lives in a nice town – hardly a novel character to Roberts fans – but who in his own way is as lacking as Abigail. She is a strong, determined woman who knows a great deal about lots of things and is never afraid to speak her mind, but knows nothing about living. He has coasted through life without commitment, except to his job.

What follows in terms of their growing relationship is obvious, but beautifully handled, the mark of Roberts at her best. This is essentially a simple story – two people growing together to bring out the best in each other and combining to solve a life-threatening problem – but if it could make a hardened ex-journo smile, it can’t be that bad.

If there is to be any criticism – and this is being hard – it’s pace and plot. Much of the drama and action occurs in the opening chapters and the heart of the book is Abigail and Brooks until the slightly stretched showdown. Never mind. In the context of a superb description of the blossoming of two very real people anything can be forgiven. This is a great light romantic read that reminded me not a little of Baroness Emma Orczy’s Scarlet Pimpernel. Here’s to Roberts’ next 200!