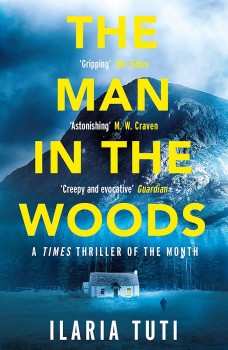 The Man in the Woods

There is a creepy man in the woods; a bad man with the face of a skull. And if you don't watch out he's coming to get you …

The setting is a remote village in the Italian Alps. It's in the present day but with references to past events that occurred in a sinister enclosed institution just over the border with Austria which in turn had links to a Nazi past. The past involved experiments into maternal deprivation whilst in the present four young friends, each neglected in some way, play in the woods watched over by an unseen companion – the Man in the Woods.

The trail of violence begins with the disappearance of a local man, the father of one of the four friends. When the man is later found dead in the woods, staked out and mutilated, a police team is drafted in from the nearest sizeable town, some 60 kilometres away.

This is our introduction to Superintendent Teresa Battaglia. An unusual leading lady, she has a gruff demeanour and a biting tongue which she uses to full effect on her new sidekick Massimo Marini. But it soon becomes clear that she is a highly intuitive operator and one who inspires admiration and devotion in her small team. One gruesome murder is followed by more savage attacks and as the rather poignant motive behind these events is gradually revealed then so is the background and inner life of Superintendent Battaglia. She is a lonely 60-something, an overweight diabetic who is facing the probable onset of Alzheimer’s.

This is the first of a trilogy featuring Teresa Battaglia and Signor Massimo Marini so there is much scene-setting which may be well worth following into books two and three. All credit to the translator, Ekin Oklap, who makes the story flow and the dialogue believable.

Despite the village closing ranks and the planting of a number of red herrings, Teresa and her team make progress as winter closes in and the snow begins to fall. The author paints a vivid picture of a majestic landscape of ravines, forest and streams set against the grand backdrop of the Alps. So much natural beauty which all the while harbours putrid secrets which the locals are unwilling to share with the outside world.

The action comes to a head on December 5, St Nicholas's Day. The whole village gathers for an evening of revelry with masked pagan figures. It's the night when the Krampus comes out – the evil figure who steals away naughty children. And sure enough, a child is abducted from his pushchair and carried away into the forest. It takes all of Superintendent Battaglia's experience, empathy and her dwindling energy to try to ensure that the perpetrator is safely captured and the baby returned to his mother.

It was pleasing to read a thriller set in a part of the world I was unfamiliar with. It's a straightforward procedural investigation, led by a different kind of detective with a little, but not too much, psychology thrown in, and with a plausible denouement that has one final twist to make a satisfying ending.