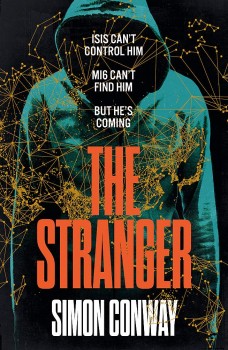 MI6 agent Jude Lyon must deal with past events which threaten the credibility of his agency – and a terrifying new threat to the whole of the British establishment.

Simon Conway – ex-Army officer, landmine and bomb clearance expert in Africa, Asia and the Middle East, director of strategy for the HALO Trust and co-chair of the Cluster Munition Coalition – has parlayed his knowledge into a series of espionage stories set against the background of the war against terrorism.

This latest novel is a tale of the greatest nightmare of the British security services – that the fanatics of al-Qaida, ISIS and their offshoots will somehow acquire a recruit who not only understands, but can also exploit, western response to any situation to their advantage.

The nightmare appears in the shape of al-Gharib – the Stranger – a psychopathic former Intelligence Corps officer who once designed the most rigorous battle tests for the Special Forces, was dismissed from the Army for brutality, and who offered his services to Sheikh al Jabal – the Old Man Of The Mountains – the only survivor of the original al-Qaida cadre which entered Iraq, in a twisted bid for revenge.

An unknown group has broken a captured terrorist bomb-maker, said to be responsible for the greatest loss of British life in a single operation and ‘rendered’ to Syria when that country was regarded as friendly.

No one had expected him to survive. His release leaves a former foreign secretary with damaging questions to answer – and the head of MI6, who has always known of his innocence, wondering who organised the break-out and who is now using the man to front a terrifying new campaign which targets the heart of the British establishment. She recalls agent Jude Lyon from a pleasurable, if dangerous, ‘honeytrap’ operation involving the wife of a Soviet diplomat and spymaster to shut down what is likely to become a serious embarrassment both to the government and the Service.

A complex and detailed, yet always cynically credible story stretches from the corridors of Westminster to the refugee camps of Jordan, the back streets of East London and the mountainous badlands of Iraq.

As Lyon pieces together the conspiracy of lies which led to this point and begins to understand the threat of the approaching horror, the reader is given an insight into the minds of those for whom perpetual conflict is both lifeblood and poison as Conway shines a stark light on the anarchy of ‘asymmetric warfare’.

A new kind of hero for our time – both vulnerable and ruthless – well drawn characters, evocative descriptive passages and a cleverly balanced narrative structure, carry this tale of dirt, death and double-dealing through some convincing unexpected twists to a final nail-biting extended sequence.

How much Conway knows that he perhaps shouldn’t, how much he has been able to translate into fiction, is a matter for debate. What is certain is that this is by far the best work on the subject for many years!