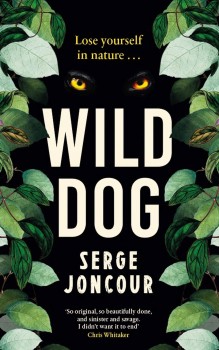 by Serge Joncour (translated by Jane Aitken and Polly Mackintosh)

Retired actress Lise persuades her producer husband to holiday in the wild hills of the Causse de Limogne. He must come to terms with his fear of nature and rediscover the basic instincts common to both man and animal.

French novelist and screenwriter Serge Joncour is a former philosophy student. His best-known film work is the 2011 Sarah’s Key which starred Kristin Scott Thomas. Wild Dog is the first of his novels published in English, and this original, beautifully written, sinister and savage tale owes much to the brilliance of its translators, Jane Aitken and Polly MacIntosh, who have not missed a single nuance while rendering it into clear and gripping language.

Set on the Causse de Limogne – ‘causse’ is an ancient Occitan word meaning limestone plateau – in the Hautes-Alpes department of south-eastern France, Joncour’s wonderful descriptions of the wild and forbidding landscape of the Massif Central, slashed by the gorges of the Tarn, Dourbie, Jonte, Lot and Aveyron, creates a stage for a magnificent allegory for ways in which a modern world, which has lost touch with nature, wears us down.

What is almost a hymn to space and calm centres on the small commune of Orcières on the Causse du Quercy, producer of half the Malbec exported through Bordeaux until the wine industry was destroyed by the phylloxera aphid at the start of the 20th century, then depopulated by the loss of much of its male population in the First World War. Now, huge areas are wilderness, with a scattering of small towns, ruined and abandoned villages, derelict rail lines. Nature has reclaimed the land and along with an explosion in wildlife, boar, fox, lynx, even the occasional alpha-predator, the wolf, have returned.

Fading 50-ish film producer Franck and his actress wife Lise, recovering from cancer, rent an isolated cottage on the Mont d’Orcières to fulfil her wish to get away from the stresses of city life. Apparently never used since its last inhabitants abandoned it, the house has no modern amenities, no wifi or phone signal.

Lise, who wants to focus on herself, reconnect with nature, meditate, paint, and take in the beauty of her surroundings, is delighted. Her husband, under pressure from his younger business partners, feels he must be reachable at all times, and struggles with the isolation and particularly the wild setting. He is so reliant on human company and technology he makes the long drive to the nearest town for any form of communication with his world.

His fears are compounded when confronted by a huge wild dog that’s half wolf. Gradually dog and man build a relationship, and through it he rediscovers the basic instincts modern life has stifled.

Parallel to their story, set in summer 2017, alternate chapters tell the story of the summer 103 years before when an uncaring French government first stripped the area of its menfolk to feed the slaughter of the trenches, then took the livestock they left behind to support and feed the machinery of war.

The struggles of the women left behind to farm the land while looking after their families and a haunting love story of the young widow of the village doctor and a German wild animal trainer who has taken refuge in the hills with his big cats provides both a parallel and a contrast.

Joncour holds the reader in suspense as he circles around his main points, the power of nature, the thin line between man and beast and the duality within us, and uses both sound and silence to produce an ominous hint of threat in both stories. The big cats roar through the night as the circle of life continues in the darkness, while silence to the villagers, a constant reminder of the men they have lost, is for Lise a perfect invitation to mediation.

The writing is rich and beautiful, the long descriptions of the hills and plateaux of an area I lived close to for many years quite stunning. This is a typically French masterpiece, almost a philosophical essay, and – despite the fact that there are only minor crimes – well worth the interest of any serious reader.