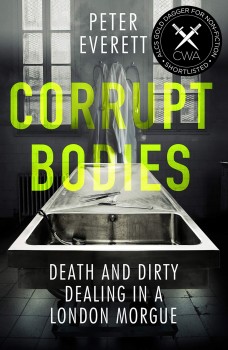 When the author becomes superintendent of Southwark mortuary, he walks into a corrupt world of sales of body parts, theft, bribery and kickbacks.

As the incoming superintendent of Southwark Mortuary, aged in his early 30s, Peter Everett believed he had landed his dream posting. In just six years in the profession of dying he’d gone from lowly assistant to running the UK’s busiest murder morgue, built on the site of the infamous former Marshalsea Prison. He knew that the task of modernising the Victorian facility would be major – but nothing could have prepared him for what he actually found!

Apart from idle staff, dirty, insanitary conditions and outdated, inefficient equipment, Southwark was a hotbed of corruption. Attendants stole from the dead, undertakers paid bribes and there was a lively trade in stolen body parts and recycled coffins! Even its staff of coroners’ officers – serving Met policemen – had their own system of ‘arrangements’ and kickbacks.

Everett’s occasionally gruesome, but riveting story of the pre-DNA and psychological profiling years before Silent Witness is a must for any reader of crime interested in the reality of what happens on the pathologist’s slab. In his time at Southwark he dealt with more than 12,000 deaths, 400 of which were murders. His job was to manage sometimes individualistic pathologists, oversee the preparation for post-mortems and work alongside Scotland Yard’s Murder Squad.

It was made more difficult because at the time there was no statutory body to oversee mortuaries. Coroners answered to the Home Office, pathologists to the NHS, coroners’ officers to their own police force and mortuary staff were employed by the local council.
It was a system wide open to abuse – something Everett was made forcefully aware of the day he took control with the man who should have been his deputy casually informed him of the “way things worked.”

Despite his attempts to halt the corruption, it was not until a whistle-blower approached Everett saying she had been offered a bribe after overhearing staff discussing stealing from bodies offered him a way of involving the outside police. In a sting operation, he invited his crooked deputy for a drink and as the pints went down the man casually boasted of brains sold to medical schools, eyes for corneal grafts, pituitary glands to medical research companies as well as stolen cash and jewellery.

A recording of that wire-tap was to become the central plank of prosecution evidence that would make front page news. The deputy – who Everett for some reason I am unable to fathom has not chosen to name although his guilty plea was public knowledge and can be found in newspaper archives for January 5 1984 – pleaded guilty and received a light sentence for conspiracy and theft.

Everett was to shock the Old Bailey jury at the trial of a co-conspirator when he dramatically declared: “The dead do not rest in peace. They rest in pieces!” But under cross-examination, this love of the dramatic led to a schoolboy error which brought an acquittal. Asked if he thought the man was guilty, Everett stated he did not think so – and paused, intending to add: “I know he’s guilty.” That pause was enough for a sharp defence lawyer to thank him kindly and conclude his evidence! Despite that disaster, Everett’s work and the wave of public revulsion it sparked echoed around the country. Examples of mismanagement, abuses and corruption were brought to light.

Several hospitals had ‘accidentally’ sent wrong bodies to be cremated. One had ‘lost’ people’s organs on multiple occasions. Another was selling body parts to universities. A morgue manager used coffins to smuggle pornographic magazines and assistants kept stolen frozen turkeys in the freezers. In one hospital a corpse declared dead, woke up in the mortuary fridge. One assistant was even charged with cannibalism!

The strain of his battle, the court case, lack of support from incompetent council officials intent only on covering up their own shortcomings, plus an ever-increasing workload and the need to be on call 24 hours a day, eventually took their toll and Everett suffered a nervous breakdown. He recovered to become a journalist and now runs his own TV production company. Changes in the law sparked by his revelations mean illegal trading in body parts is now virtually unknown.

This is a fascinating and in its own way, important, autobiography, graphically and brutally illustrated by background descriptions of some of the more famous cases which crossed Everett’s slabs during his time in the world of the dead.