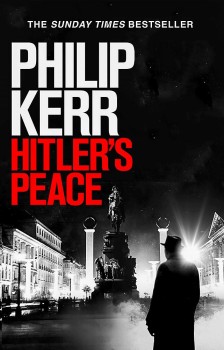 In autumn 1943 the tide of war has turned and Germany is putting out peace feelers. But the response of the allies will be settled in Tehran.

Philip Kerr blends his masterful understanding of wartime political events and brilliant inventiveness to create a thrilling story pivoting around one of those moments in history which determine the fates of millions.

By October 1943 it is clear that the axis powers cannot hope to win the war. In public, the allies are demanding unconditional surrender. Germany can still hope, however, to drive a wedge between the politically antagonistic Stalin and the West. One of the functionaries involved in secret informal discussions is Schellenberg from Amt VI, the foreign intelligence section of the SD (the intelligence agency of the SS).

The intention of the allies to hold a meeting in Tehran is known in Berlin, and this gives rise to thinking about another approach. If Stalin, Franklin D Roosevelt and Churchill could be eliminated by a raid the disarray would set the allies back months and possibly cause political instability leading to the withdrawal of one or more of the combatants. Again, Schellenberg is involved in the planning.

Events from the other side centre on Willard Meyer, a philosophy professor working for the Office of Strategic Services (OSS) in Washington. Meyer is appointed by FDR to investigate a report about Nazi claims to have uncovered a mass grave of Polish officers at Katyn, allegedly killed by the Russians. He is subsequently appointed to FDR’s staff to attend the meeting in Tehran which will bring together the allied leaders for discussions on policy for conclusion of the war and after.

As FDR’s team make their way across the Atlantic on the battleship Iowa, Meyer deduces the presence of a spy aboard. He narrowly avoids death in Cairo, and on arrival in Tehran the spy has still not been identified. The summit meeting is thus threatened from several directions, but an even bigger surprise is planned. Meyer will play a significant role in history which is never likely to be acknowledged.

This book was published in the US in 2005 but is only now being released in the UK after the author’s death. The context is historically of crucial importance, and Kerr packs in factual information, much of it strange and fascinating. He is so at ease in translating the facts about life on both sides of the Atlantic at the time that the reader is instantly transported back and put in the shoes of well-to-do sophisticates, whose interests and thinking become easily understandable. You may not like them, but Kerr’s skill makes it easy to grasp what they are about, and the circumstances in which they swim.

And because of the uncertainty of their times and the places in which they find themselves, danger lurks in every corner. Meyer particularly emerges as something close to James Bond, albeit rather more believable. Hitler’s Peace is set within a clever and temptingly convincing alternative history and lives up to Kerr’s best in every way.