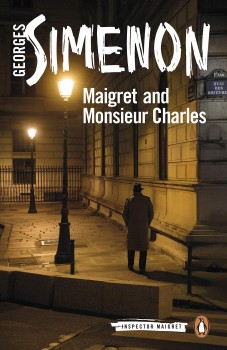 In his last appearance, Maigret investigates the disappearance of Monsieur Charles, a wealthy lawyer well-known in Paris nightclubs.

I feel somewhat honoured to be assigned by Crime Review the last of the 75 Maigret novels, re-issued by Penguin for discerning readers. Written between 1931 and 1972, these stories now have a distinct feel of the past about them, while at the same time bringing an immediate intimacy with both the detective and the lives with which he comes into contact.

Maigret’s final case, at least as far as the records show, begins when he receives a visit from Nathalie Sabin-Levesque, a well-to-do woman in her forties, supercilious and showing signs of alcohol addiction. Her husband Gerard has been missing for a month; her delay in reporting this is explained by the fact that throughout his married life he has been prone to absconding for days at a time.

There is no mystery about these absences; under the name Monsieur Charles, Gerard has been picking up girls in nightclubs and then spending a few days with them, once or twice a month. Gerard and Nathalie spend very little time together even when he is home, and they have no friends to visit or entertain.

Maigret finds that Nathalie has married into a rich family who have nothing in common with her, she is disliked even by the servants and has a very lonely life, her unpleasant nature and drinking being both cause and effect. Maigret’s instinct tells him to be tough on her but suffers for it, taking his investigation to heart: “Because each time I am caught up in a human experience.”

Without making his suspicions explicit, or as far as the reader knows actually having any at the front of his mind, the detective makes certain dispositions that eventually bear fruit. At the same time, he is uneasy in his mind and his eating and drinking habits, so much a part of the man, are disturbed. When Nathalie’s health starts to deteriorate, he does what he can to assist.

Maigret starts the book being invited by the prefect of police to take a promotion to head of the Police Judiciaire, but has no hesitation in his refusal - he would rather remain head of the Crime Squad where he can remain in an active role and ‘get out of the office, soak up the atmosphere and discover different worlds with each investigation.’ This, of course, is precisely what makes his exploits so engrossing.

Simenon seems effortlessly able, in a few masterful strokes, to convey the essence of the lives brought into Maigret’s orbit, each different but with a distinctly French flavour. This is a series to keep on your bookshelf and dip into from time to time to remind yourself of the best in the genre.