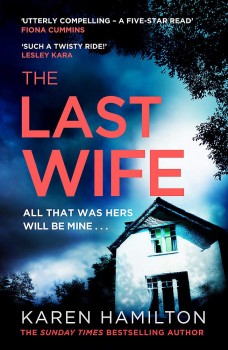 After Nina’s death, her best friend Marie steps in to help her grieving husband with two children and a large house, gradually taking over more and more of her friend’s former life. But not everyone thinks that’s a good thing.

Marie had to stand by while her best friend Nina died of skin cancer. Marie couldn’t help Nina in her struggle with melanoma, but she can help her family after Nina’s no longer there, and she’s happy to promise to do exactly that. After the breakup of her own relationship with Ben, she moves in with Nina’s widower, Stuart and their two children Felix and Emily. The speed at which Marie seems to get her feet under Stuart’s table causes some raised eyebrows locally, and someone starts expressing their disapproval in a series of anonymous cards and notes.

But Marie is impervious to anyone else’s feelings. Her feelings about Nina have always been all-consuming, and now that Nina is dead, Marie is determined to live up to the promises she made. Stuart becomes increasingly reliant on her, ignoring the disapproval of his mother-in-law, Deborah, who has been helping look after the guesthouse Nina used to run.

That’s another thing Maria gets involved with, too, as well as running the children to and from school and putting them to bed. Then Camilla, an old friend of Nina’s, returns from Canada unexpectedly. Her presence threatens to drive a wedge between Marie and Stuart, especially when she moves into the guesthouse with her own daughter.

In her determination to insinuate herself into every aspect of Nina’s life, Marie stumbles on an old secret, one that threatens everything she thought she knew about the woman she felt was her closest friend.

The Last Wife is a clever study of the fine dividing line between friendship and obsession. It’s clear early on that Marie’s feelings for Nina were – and still are – far from healthy. She wanted their friendship to be exclusive, not liking it when Marie had other friends or kept secrets from her. Marie’s had a long succession of therapists, but it’s hard to see what good they’ve done her. She’s self-obsessed, controlling and has no ability whatsoever to see herself as others see her. There was a complete inevitability about Marie’s relentless takeover of Nina’s former life and even the twists, when they came, weren’t overly surprising.

I found it hard to form a connection with any of the characters. I disliked Marie almost from the start. Stuart came over as rather wet, letting Marie usurp more and more of his dead wife’s life without demur. Camilla’s motivations were harder to fathom at first but turned out to be tied with up the Big Twist. Unfortunately, by the time I reached that point, I would have quite happily consigned all the main characters to the nether regions of hell where the devil doesn’t go for fear of the stinging nettles.

Psychological thrillers are a hard sell for me, and I think I need to like at least one of the protagonists for a book to work for me, but if an examination of an obsessive friendship is your cup of tea, then I think The Last Wife should push all the right buttons.