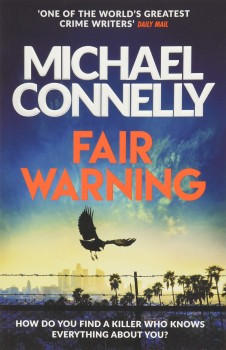 When journalist Jack McEvoy finds himself a person of interest in the murder of a woman he dated once, he’s determined to clear his own name, as the police don’t seem to be making any moves in that direction.

Jack McEvoy is a consumer affairs journalist with a track record of having written about and found killers, but he’s had no previous experience of being accused of a crime. That all changes when a woman he dated once is found dead, and the police make it very clear that he’s a person of interest in their investigation into Tina Portrero’s brutal murder.

Instead of keeping his head down and working at his job on the online news site FairWarning, McEvoy decides to start making his own enquiries into the woman’s death. Unsurprisingly, this quickly brings him into conflict with the detectives working on the case. More surprisingly, his editor Myron Levin seems willing – despite some initial reluctance – to let him work on this as a possible story, despite the screaming conflict of interest in looking into a murder in which he is one of the suspects.

For that reason, I must admit that Fair Warning quickly turned into something of a hard sell for me, despite the fact that I normally happily devour Michael Connelly’s book with no hesitation. I didn’t warm to McEvoy at all, and my sympathies were entirely with the detectives who wanted him to get his nose out of their case. For a large chunk of the book, I really didn’t connect with the story at all, but when McEvoy started to look more generally into the surprisingly murky world of tracing family ties through DNA, it then became clear that the story was anything but a simple murder tale.

McEvoy’s investigative skills stand him in good stead, but despite that, it becomes clear relatively quickly that the real killer always seems to be one step ahead of him. The killer and their motivations remain shadowy and unclear, and there’s never really as much menace as I’ve come to expect from Connelly’s characters.

My initial impressions of McEvoy stuck with him and I found him the least engaging of all his creator’s protagonists. The words conflict of interest are not ones that figure in his lexicon and he seemed to be completely unable to see that his attempts to contact relatives and friends of the murdered woman were highly inappropriate and unprofessional. Any sympathy I had for him quickly evaporated.

I might have been hampered by not having met him before as a character, despite him having featured in two previous books, so perhaps I saw him more through the eyes of the harassed detectives rather than through his own eyes, where no doubt he stands out as a paragon of virtue. The plot felt more pedestrian than usual, and there were too many info dumps for my liking.

Fair Warning isn’t Connelly at his best, but things improves as the book goes along, leaving me reasonably satisfied at the end. This isn’t a world-beater, but even when Connelly isn’t on top form, he’s still able to deliver a serviceable crime thriller with enough twists to sustain my interest.