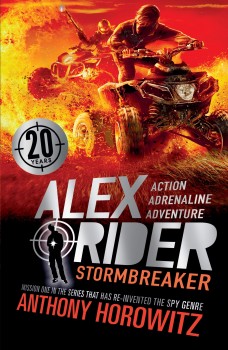 Reluctant 14-year-old spy Alex Rider is sent to Cornwall to investigate rich philanthropist Herod Sayle and his plan to install a new generation of computer in every school in the UK. Alex soon realises that there’s a lot more to the Stormbreakers than Sayle is letting on, and with that knowledge comes extreme danger.

It’s hard to believe that it’s been 20 years since Anthony Horowitz’s reluctant teenage spy Alex Rider burst onto the teen thriller scene and promptly claimed it for his own. A film followed in 2006, with Horowitz writing the screenplay, and the well-cast Alex Pettyfer in the main role, although he did look a lot closer to 16 than 14.

The book starts with the classic line ‘When the doorbell rings at three in the morning, it’s never good news.’ And it certainly isn’t good news for young Alex Rider, when he wakes up to find a police car outside the house where he lives with his uncle, Ian Rider, and their housekeeper, Jack Starbright, a 28-year-old American woman who came to London to study law and never left.

The police bring the news that Ian, Alex’s only living relative, has been killed in a car crash. According to them he wasn’t wearing a seatbelt, but Alex knows that can’t have been the case. Ian was always too careful for that. Then at the funeral, Alex meets Alan Blunt, the chairman of the bank where his uncle worked and catches a glimpse of something very strange – a flash of a pistol in a shoulder-holster, worn by Blunt’s driver – and knows that something is very wrong with the official version of his uncle’s death.

Determined to get to the truth, Alex tracks down the wreckage of Ian’s car to a breaker’s yard and discovers bullet holes in the vehicle. Then when he’s asked to see Blunt at the bank where Ian worked, Alex is shocked to learn that he’s been lied to all his life. Ian Rider was a spy in the employ of the Special Operations Division of MI6 and he was killed while on an active mission. A mission that MI6 want Alex to continue …

I enjoyed the Alex Rider books hugely when they first appeared, and my interest was recently rekindled by a new series made by Amazon based on the second book in the series, Point Blanc, importing elements of Stormbreaker. The series was slick, dark and very entertaining, capturing the essence of the books and the characters beautifully, and catapulting me back into Alex’s exploits from the beginning.

In Stormbreaker, he’s up against Herod Sayle, a self-made billionaire philanthropist with an ambitious plan to make a gift of a revolutionary new computer to every school in the UK, but MI6 are suspicious and want someone on the inside, and that’s where Alex comes in, masquerading as a competition winner, whose prize is to spend time with Sayle at his heavily guarded factory complex in the depths of Cornwall.

Twenty years later, the idea of a single computer in every school has been completely overtaken by the march of accessible technology, so it’s easy to see why the first book in the sequence wasn’t used as the starting point for the Amazon series, but despite that, the book has worn very well, and still packs plenty of excitement and a hefty punch of moral ambiguity on all sides. Naturally, Sayle has a dastardly plan, but MI6 are also culpable in their willingness to send a boy barely into his teens into a dangerous situation, armed only with some gadgets that wouldn’t be out of place in a James Bond story.

Despite the inevitable comparisons with the world’s most famous spy, the Alex Rider books stand on their own perfectly balanced two feet. They paved the way for Robert Muchamore’s CHERUB series, also featuring an organisation happy to use children to go into situations where an adult would be immediately suspect, and many other stories in this genre.

The Alex Rider series now runs to 14 books, with the most recent, Nightshade and Secret Weapon, being published in April 2020. There are also several graphic novels and short stories. Alex ages slowly in physical years, with several adventures packed into every year. but emotionally and mentally, he’s now a very different boy, and it’s that progression that makes the series special. Alex saves the world on numerous occasions, but every outing takes its toll on him, and he carries the sort of physical and mental scars that no teenager should be subjected to, and Horowitz never makes light of that.

I’m thoroughly enjoying working my way through old favourites and will soon be arriving at books in the series that I’ve not yet read. If you aren’t familiar with the series, start from the beginning, and celebrate 20 years of a young spy who can hold his own in adult company any day.