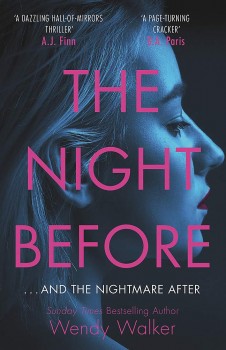 When Laura doesn’t come home after a blind date, her sister senses something terrible has happened. But her instinct can’t tell her who the victim might be.

Laura, Rosie, Joe, and Gabe were childhood best friends from a small Connecticut district. Rosie and Joe married and now have a son, Mason. Gabe married an outsider, Melissa. She doesn’t get or like the cosy clique, particularly when Laura moves back to a room in Rosie’s house to lick her wounds. Laura is the only singleton, after yet another break-up, proving once again to herself that she is unlovable. Though the four friends spend their evenings drinking and reminiscing about their school days, they never mention the years-old wound that changed them all: the murder of Laura’s boyfriend.
Laura, perhaps too desperate for love, signs up on a dating website where she meets Jonathan Fields. Rosie thinks Laura is moving too fast but still lends her sister a look-at-me dress, a clutch bag and, as a safety measure, her car.

But Laura does not come home. Not that night. Not the next morning. And with the police showing less interest in her disappearance than a teenager doing household chores, Rosie instigates her own investigation, along with Joe and Gabe. But this is no Famous Five mystery, and although Rosie’s instinct is to fear for her sister, there is a part of her that is terrified for Jonathan Fields.
The story is told in relatively snappy chapters from Laura’s point of view (the night before) and Rosie’s (the morning after), with short injections of Laura’s therapy sessions a few weeks earlier. Wendy Walker tickles the story’s hind legs with a lunge whip, driving it forward. Walker also scatters enough red herrings to sink a trawler.
That, along with a stable yard of potential criminals, could make it easy to arrive at the final furlong with no clue about whodunit. Except for two details. First, the somewhat formulaic plot. Second, the uncertainty as to whether there was even a crime committed the night before until extremely late into the book.
The problem with Laura is that she is a stagnant protagonist, who spends far too much time indulging in miserable, self-absorbed, and repetitive trains of thought. Her sister is flat, even though she does seem to find her growth arc and grow a pair early on. In terms of development, Gabe, Joe, and Jonathan aren’t even on the same racecourse as Rosie and Laura, let alone a trio of also-rans. The first two are little more than names on the page, and Jonathan feels like a character who has been made to fit the plot.
The sisters’ voices are relatively distinct, but Walker has also made it easier by putting Laura’s point of view into the first person, present tense, whereas her sister’s is in the third person past tense. For me, there was little sparkle to the backdrop. This story could be set anywhere, and the author did not make much use of the milieu to add to the atmosphere.
However, The Night Before is easy reading entertainment, with enough question marks to keep the pages turning. It is a comfortable, one-sitting read. Walker could become my new guilty pleasure, with this relatively lightweight study of how our childish past carves and highlights our future perceptions.