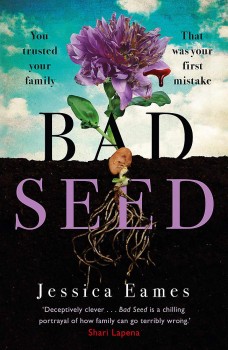 A recently widowed woman is trying to pick up the pieces of her life, but it seems that someone is out to stop her succeeding.

Nicola, recently widowed and in a difficult place financially, is trying to pick up the pieces of her life. Living for free in a small annex in the garden of her brother-in-law’s family home helps, but her relationship with Ben and his wife, Fiona, is strained to say the least.
And although she has a new boyfriend, she feels he is closing in too soon. It doesn’t help that she is not feeling well. Her GP puts her symptoms down to the menopause. But it is only when Nicola makes the connection between the menacing notes, the moved possessions and her unmentionable secret that she realises something truly sinister is happening.
Sarah, Nicola’s daughter, has not come to terms with her father’s death. And although she visits her mum regularly, there is a distance between them, one that she doesn’t appear to have with her aunt, one that she will soon find out can never be eradicated. Because Sarah is just about to wake up in a nightmare, where nothing and no one can be believed.
Bad Seed’s plot is fresh and fun in a non-funny way, giving rise to a knotty domestic noir. It’s told from the points of view of Nicola, Sarah and Fiona, along with a scattering of transcripts, and is a dark story family about secrets, lies and revenge.
Nicola is not a character I could connect with. I found her at the same time two dimensional and insipidly self-absorbed. Sarah was irritating, and her aunt Fiona even more so. Perhaps it is because the book is written in the third person past tense that it is difficult to engage with any of the characters. But I also felt that there is little distinction between the women in the story, and the men are simply stereotyped. The characters felt small and forgettable.
Although the pot is well thought out, and I didn’t see the end of the first part coming, the writing is average. Dialogue is flabby with too much tell and tautology, and emotions are spoon-fed. The perpetrator unfortunately wears a neon light from the start, despite some brave attempts at misdirection.
This story is set somewhere near Bath but seems to float around ungrounded. Domestic noir it may well be, and much of this story goes on behind closed doors, but there is little sense of place.
The writing style is definitely not my cup of tea, but it is easy, giving rise to a fast and uncomplicated read. As a story that can be inhaled in one sitting, this is a fun debut and Jessica Eames is an author I will be happy to read again.