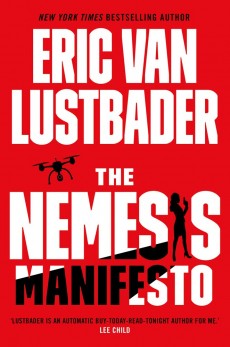 As American democracy comes under threat and her fellow agents are systematically eliminated, lone wolf black ops field agent Evan Ryder must find out why.

How do you follow Jason Bourne – except very carefully and at a considerable distance? That was the problem facing Eric van Lustbader. His answer is this start to a bold new series featuring a lone wolf field agent for a black ops arm of the Department of Defense. Not too much new there apart from the fact that this singular new hero is a woman.

Van Lustbader, American master of the smart international espionage thriller, introduces the kick-ass and deadly Evan Ryder in an epic story of the silent war between predatory forces that are threatening to undermine the basis of American democracy.

Little has changed since Bourne. Ryder is also subject to flashbacks to some kind of unspeakable tragedy in her past; the secret war of influence and disinformation between a resurgent and aggressive Russia and a confused and defensive America continues – occasionally spilling into bloody violence as one side identifies the other’s agents and eliminates them.

In this sophisticatedly dark, expertly plotted, at times almost hypnotically suspenseful tale of  political ambition, betrayal and cutting-edge technology, van Lustbader does what he has always done so well, which is to pick up current issues relevant in the current US political climate and transpose them into a plot which could become all too real.

With America so bitterly divided, a Trump-style President in the White House and a Russian ‘Sovereign’ – a barely disguised portrayal of the ‘New Czar’ Putin with his ambition to make his country again a major world force – some authentic spycraft and a tangled web of operatives and agencies, it is at times difficult to keep track of the layers of intrigue as the story plays to almost every modern conspiracy theory.

Throw in bloody interagency feuds, family ties to the Nazis, the exploitation of the American far right through the mysterious Nemesis and a plan to destabilise the Department of Defense, and there’s a lot for both Ryder – and reader – to unravel. More may become clearer in the second book presaged by a minor cliffhanger, or even a prequel that sets up some of the character relationships.

After a fairly slow start, including a debate on the underuse of female operatives in undercover operations, the action moves quickly from Washington to the Caucasus, Austria and a fortress in Germany as Ryder unearths a conspiracy network far more complex than anyone could have imagined.

Credible action and often near-lyrical prose support a complex, intelligent plot. A series of expertly plotted, thought-provoking twists, betrayals and a final extended fight sequence – all of which seem to pay more than a nod to Richard Condon’s great thriller The Manchurian Candidate – will leave readers exhausted.

Evan Ryder is here to stay and could well become as major a player in literary espionage as her predecessor.