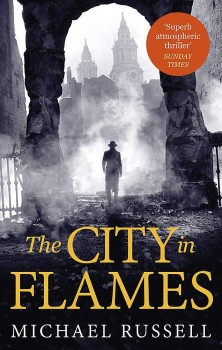 The City in Flames

Garda Special Branch Inspector Stefan Gillespie goes undercover to investigate a plot inspired by the IRA and the Germans to assassinate the Irish president.

In 1940, as more than 50,000 Irishmen volunteered for the British forces, the remains of the IRA, wrecked by pre-independence British action, the civil war, divided and under constant pressure from the government of Eamon de Valera, is desperately hoping for a German invasion – an idea favoured in some Nazi circles after the failure of Operation Sea Lion, the plan to invade England.

In blitzed London, Churchill’s government is considering a pre-emptive strike to deny the ‘back door’ route to invasion and regain use of Ireland’s west coast ports so vital to the Atlantic convoys keeping the country alive, closed by de Valera’s neutrality.

Irish intelligence is split between the Garda Special Branch, primarily concerned with the IRA, and Military Intelligence, G2, which deals with external threats and co-operates closely with its British counterparts, although always trying to protect de Valera’s stance.

In Berlin, rivalry between the Abwehr, German military intelligence and the Sicherheitsdienst, Himmler’s SD, is intense. Abwehr agents sent to Ireland were largely ineffective and quickly detected and its leader was suspected of questionable personal loyalty to Hitler.

An actual Abwehr plan to insert three agents, one a woman, into Ireland, the involvement of ex-IRA leader and Spanish Civil War International Brigade officer Frank Ryan, who despite his anti-fascist views was the IRA’s main German link, are all fact.

The premise of the story is a plot to murder de Valera causing enough strife and unrest in and forcing Britain to intervene is a bit of a damp squib. The side-story about Peter Coogan seems irrelevant, although allowing Stefan’s father, a former detective, to set up his own investigation. In 1940 Ireland would there really be a coach full of tourists and two or three cars sharing the road?

Both plots are held together by coincidences that might be considered a little too convenient, but Russell’s easy, fluent, clear, calm and never over-heated style, a realistic set of fictional characters, interwoven with real people and events, make this it a page turner of literary quality.

This muddled, mixed, but nevertheless compelling mixture of fact and fiction brilliantly portrays a world in which truth has little currency when balanced against political expediency. The multi-stranded plot is neatly pulled together with a sinister and clever twist at the end and brilliantly illustrates the artificial sense of stability and democracy in wartime Ireland.

Russell captures the essential truth of war – that lies and propaganda are more important than truth – and expertly depicts its effect on the lives of those such as Gillespie, caught on the edges of events over which they have no control and no full understanding.