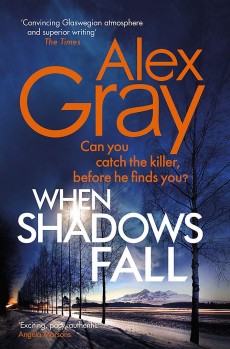 Former policemen are being murdered across Scotland. Superintendent Bill Lorimer must seek the motive and the mastermind behind a series of killings.

Glasgow-born Alex Gray is a former folk singer and English teacher – illness cut short that career and saw her turn her hand to becoming a full-time writer. But it was a brief time as a visiting officer for the Department of Social Security, seeing life in Scotland’s second city often at its worst, that perhaps gave her the understanding of humanity which makes her stories so outstanding.

Every character has a part to play and they combine to produce a realistic and convincing whole set against an authentic Glaswegian atmosphere. In addition, she has an almost uncanny ability to make the sheer hard slog of police work interesting.

When Shadows Fall is a relentless and intriguing psychological thriller, filled with suspense, twists and gripping imagery from a writer at the very top of her game that will have you unwilling to put it down.

Detective Chief Superintendent Bill Lorimer, now head of Police Scotland’s Major Incident Team, is investigating a cold case murder of a man, possibly an ex-criminal, shot in the head at close range with an Army rifle, when he is shocked to hear that an old friend and former colleague has been shot dead at his home.

It’s not long before another murder of an ex-policemen, and a member of the MIT team, shot dead on her doorstep, and other killings are reported in different areas of the country and MIT are called in to oversee the case.

Obviously this is a targeted campaign – the first two victims and the cold case corpse were shot with the same gun – yet with no link between them to identify a possible killer, local detectives and Lorimer’s team begin to struggle. As the death toll mounts, recruitment figures drop, resignations rise and police all over the country begin to wonder who will be next?

Gray’s stories never concentrate totally on her protagonist, but always introduce lesser characters, nevertheless key to the plot, who accurately reflect the various personalities and organs of law enforcement and their individual roles. With a fine eye for detail and immaculately researched background, her stories offer some of the best descriptions of police operations I’ve read – with every character believable and intensely human playing their part.

Even the parallel story of the relationship between an older criminal, once a noted hard man and killer, now dying of cancer and serving the end of what will prove a final sentence and a non-judgemental prison chaplain, illustrating that redemption and salvation is not always out of reach, is beautifully slotted in to the whole.

And in keeping with her policy of highlighting all aspects of police work, the fictional psychiatrist Solomon Brightman and the very real and eminent soil scientist Professor Lorna Dawson once again have key roles to play in the detection of the crime.

This series just gets better and better and still feels remarkably fresh. Familiar characters, together with key new additions, are caught up in a warped quest for revenge which is not beyond the bounds of possibility. When Shadows Fall is a superb novel which will leave fans of realistic police stories impressed and wanting more.