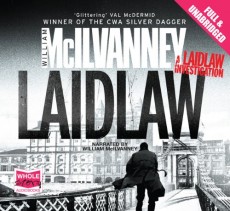 Glasgow DI Jack Laidlaw hunts for the killer of a young woman – but it's touch and go as to whether he finds the murderer before those hell-bent on revenge do.

Pssst, you wanna read something that'll make Ian Rankin and Denise Mina look like wusses? Then read the granddaddy of Tartan Noir, William McIlvanney. Apparently his books influenced Scottish TV cop show Taggart. And someone does say early on in Laidlaw: “There's been a mrrrrddrrrrr!”

McIlvanney wrote a trilogy of Glaswegian crime novels for which the word gritty seems rather too weak. There's homophobia, sectarianism, gangland violence, poverty … So not much has changed in 35 years, then. The first book, Laidlaw, dates from 1977 and stands up remarkably well with just a few reminders of what's changed. The Papers of Tony Veitch appeared in 1983, and Strange Loyalties in 1991. McIlvanney has book-ended the crime novels with short stories and gritty tales of working class men.

In Laidlaw, a young woman has gone missing – and her father, who reluctantly reports her disappearance to the police, has trouble tattooed on his forehead. When she's found dead in a park, it's a race as to whether the police or a motley collection of gangsters hell-bent on revenge find the killer first. And despite McIlvanney showing his hand early on, there's tension and a feeling of claustrophobia as both sides close in on the murderer.

DI Jack Laidlaw is an angsty sort of bloke who winds up his colleagues as easy as blinking. And he's the archetypal maverick who drags bemused young DC Harkness all over Glasgow on buses and into lowlife pubs and nightclubs as they try to find out who murdered and sexually assaulted the girl.

One of the elements that makes this 1977 book so fascinating is its matter-of-fact treatment of homosexuality and a gay main character. McIlvanney nails the casual homophobia of the time and place, although he makes Laidlaw very much live and let live and the gay character nobody's victim. Mind you, this is a time and place equally riven by sexism and hatred of those who may be a different religion.

If you've ever been to readings, you'll know that a lot of authors aren't great shakes at reading out their work. McIlvanney, who doesn't appear to be moonlighting as an actor on the quiet, takes the book, grabs it by the scruff of the neck and shakes the hell out of it. He's a cracking prose writer – spare yet lyrical - with phrases that leave you smiling (the man with a face like a war museum, Harkness and his dad grunting at each other over breakfast like a chimps' tea party, and the bloke who parts his hair near his shoulder and has trained it to climb across like clematis), but the dialogue really sizzles – it sounds like he's been breakfasting on iron filings. His voice occasionally drops too low on the quiet passages, but he gives lie to the assumption that you want an ac-TOR with RP narrating audiobooks.

Canongate are reissuing the books, and the audiobook version is from Whole Story, who do what they say on the tin – there's no clumsy editing to cram the book into three hours. The print versions are worth your time, but if you want a real jewel of an experience, there's absolutely no contest - get the audiobook and uncover a forgotten gem. I hope Mr McIlvanney is gargling in preparation for recording the next two books in the trilogy.