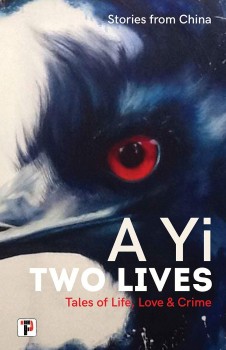 Seven short stories from China with a dark and experimental feel to them.

This collection represents a challenge to the reviewer: the stories are not linear, tending to start in one direction and then veering unexpectedly in another. Characters are barely introduced before being abandoned for others, although there is frequently a subject at the centre in the grip of a particularly strong emotion.

The collection begins with Two Lives. A student in despair at exam failure, rejected by a monk to whom he appeals, rapes a woman, runs away and becomes a beggar, then is rescued and becomes a big-shot in Beijing, returning to confront the monk. This is followed by Attic, in which a woman kills and conceals the body of her husband in the attic to avoid confronting her dominating mother.

In Spring, a man describes his relationship with a friend of his wife who moves in with them and then, unhappy at the impossibility of a future with him, commits suicide. Bach tells of a man who is supposedly lost on a mountain, who reappears months after an extensive search has been discontinued and he has been given up for dead.

Human Scum is an odd tale of a man debilitated by transfusions he is giving to a woman to help her regain her youth. In Fat Duck, a daughter is strangely affected by the death of an abusive grandmother. The final tale, Predator, starts with a blind fortune-teller and morphs into a story about a man with a terminal illness.

As is probably clear from the above, there is little humour to be found in these tales. Confronted by unpleasant or stressful experiences, the subjects generally display confusion and dysfunctional or obsessive behaviour. Observers are universally unsympathetic, and the whole context is emotionally very cold, described as an unsentimental worldview.

The other challenging aspect is the literary style, some of the characteristics of which were referred to in the introduction, although there are others which some may find difficult including occasional passages of free expression, odd lists of items extending to over half a page, and frequent references to ‘he’ which could equally mean one of several people.

The Chinese setting comes through very strongly. The stories are placed primarily in the provinces, small towns or villages, with plenty of ignorance and ancient superstition. The modern world has made limited impact, and despite the occasional mention of high-rise dwellings and mobile phones, the most common background is small villages with few paved roads. While the depiction is less than positive, it gives a powerful flavour to the writing.

Readers looking for an easy read are unlikely to find this too appealing; the collection calls for attention and thought to derive much benefit. Those who relish experimentation may find something here. It is certainly something you don’t find every day.