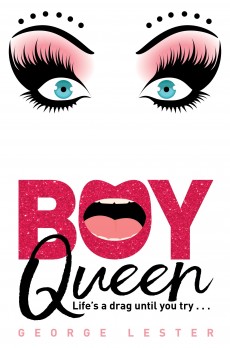 When Robin Cooper’s world falls apart after he’s rejected by the drama school he’s desperate to get into, he finds unexpected happiness in glitter, glamour and the world of drag.

Robin Cooper loves musical theatre and is absolutely desperate to get into a prestigious drama school. He’s certain he did well in the second interview, in fact he’s sure he couldn’t have done better. Everyone thinks he’s aced it, and his next few years are all mapped out – he’s going to share a flat in London with his best friend and will be doing something he loves.

When the letter he’s been waiting for so eagerly finally drops on the map, Robin’s life abruptly falls apart. Instead of doing what he’s always wanted, he’s going to be stuck at home while his friends go off to university. To make matters worse, his boyfriend won’t publicly acknowledge him and blanks him most of the time, not answering texts and continuing to hang about with his homophobic friends instead of spending time with Robin.

No matter how hard they try, Robin’s best friends Natalie and Greg can’t haul him out of the pit of despair he drops into after this latest rejection – until a night out at a drag club in a nearby town shows Robin a world that he’d only experienced before on television, but in the flesh it’s everything Robin’s always wanted and more. The queens radiate confidence and outperform anyone else he’s ever seen on stage.

He knows this is something he wants – needs – to try, and his friends are prepared to help him, as is professional drag Queen Kaye Bye. The only problem is that Robin knows his mum won’t approve. Since he was the victim of a homophobic attack in the same town over the summer, she has been afraid for him, and in her eyes, getting involved with the drag scene will open him up to more danger. And then the lies start and Robin’s life becomes more and more complicated.

I absolutely adored George’s Lester’s stunning debut. Boy Queen is funny, perceptive, heart-warming, heart-breaking, compelling and impossible to put down. I loved Robin, his friends, his mum and the glitzy, glamourous, over the top world of the drag scene. Lester, a drag queen himself, writes with all the intimate fly on the wall knowledge that only comes with being a community insider, enabling him to create vivid, memorable characters who can switch in and out of their queen personas in the blink of an eye. This is a classic coming of age book that will appeal to anyone who has ever felt that they don’t quite fit in.

Robin’s mum is one of the great adults in teen/YA literature. She’s pragmatic, supportive and as sharp as a knife. She’ll go all momma bear on anyone who threatens Robin, and her monologues are some of the highlights of the book, especially when she lambasts the moral elevation of virginity as a construct of the patriarchy designed to oppress both women and men. I was jumping up and down and cheering her on.

I quickly became wholly over invested in Robin’s slow burn romance with school new boy Seth, certain that he deserved better than Connor’s refusal to acknowledge their relationship. Seth isn’t afraid to stand up for Robin, which is something Connor was never prepared to do, and he’s also happy to help Robin with his makeup. Between Seth and Robin’s drag mother, Kaye, they give him the confidence he needs for his biggest performance ever.

Boy Queen is a novel that deserves to mop up every award going, and George Lester is a brilliant, assured new voice in the small but growing world of LBGTQIA+ books.