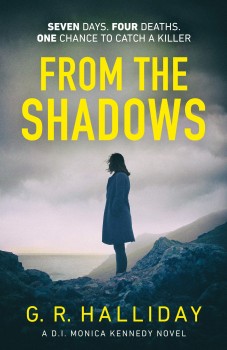 A serial killer is stalking the Scottish glens, leaving mutilated bodies carefully posed with a macabre memento. DI Monica Kennedy needs to track down whoever is responsible before the deaths mount up even further.

When the body of a teenage boy is found, horrifically mutilated and very obviously in a posed position, DI Monica Kennedy is thrust into the limelight, something she usually prefers to avoid.

The victim turns out to be 16-year-old Robert Wright, who came home late, went to his room after an argument with his dad and was never seen again. The post-mortem reveals a mysterious black rock lodged in Robert’s throat. When Monica comes into contact with Inverness social worker Michael Bach who’s desperately hunting for one of his clients, Nichol Morgan, she learns that Nichol was seen clutching a black rock the last few times Bach saw him, and starts to wonder whether Nichol’s disappearance is connected to Robert’s murder.

When another body turns up, similarly staged, also with the tell-tale black rock in the throat, Monica is convinced she has a macabre serial killer on her hands.

I’m fast coming to the conclusion that there’s no such thing as a happy, well-adjusted boringly normal fictional copper. They all seem to be schlepping around enough baggage to ground a Boeing 747. In this case, Monica is 44 years old, tall, and with big feet. She’s also a single mother. It’s not the most unusual baggage I’ve come across, but it seems that no new police character can burst onto the over-crowded crime scene without something that makes them stand out, and in this case, it’s Monica’s height that seems to cause her the most angst.

To be honest, she doesn’t need these oft-remarked physical attributes, they certainly don’t enhance the plot and felt rather contrived and unnecessary. I liked Monica well enough without that sort of unnecessary detail. She’s smart – apart from when her creator deliberately hits her over the head with the stupid stick for the sake of the plot – tenacious and rather pleasant, something that seems to be in very short supply these days.

I’m not a huge fan of serial killer books, although I do seem to have read my fair share of them recently, but Halliday manages to rise above the usual gore-fest despite the usual unhealthy emphasis on the nature of the crime. There was enough intrigue here to keep me going. I cared about Michael Bach’s search for his young client and that was a definite bonus.

The chapters alternated between Bach and Monica, with the occasional interspersing of ones from the point of view of the killer which, to be honest, didn’t add much to the narrative as there were no particular insights to be gained from them, other than the knowledge that the murderer was pretty barking, which came as no great surprise.

GR Halliday has produced a solid police procedural with a brooding sense of place and a main character I certainly wouldn’t mind seeing again, but I hope Monica can lose her hang-ups and stand tall without worrying about her height.