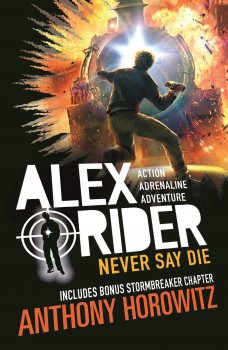 Alex Rider, traumatised by the murder of his best friend and guardian, is determined to learn more about her death, even if his quest might extinguish the tiny flicker of hope kindled by an inexplicable email.

Reluctant teenage spy Alex Rider is back. For a while it appeared that Anthony Horowitz was content to let the series end with Russian Roulette, which took a trip back in time to examine the backstory of the complex and in many ways pivotal character of top Russian assassin Yassen Gregorovich, but Horowitz fortunately couldn’t leave his main character alone for long.

Following the murder of Alex’s best friend, housekeeper and guardian, Jack Starbright, Alex is now living in America as the ward of Edward and Liz Pleasure, the parents of his friend/girlfriend Sabrina, who never quite manages to shake off the problem of being saddled early in the series by a surname that is all too reminiscent of the naming of early Bond girls, something that seems even more out of place now than it did when the earlier books in this series were written.

Alex is haunted by the memories of Jack’s death. He’s clearly suffering from PTSD from witnessing the moment when a vehicle exploded, killing her during an escape attempt in Egypt after capture during a supposedly simple mission for Alex in Cairo. Therapy isn’t helping and he’s drifting away from Sabrina. Receipt of an odd email that almost looks like it might have come from Jack fuels Alex’s need to return to the site of her death. Although he knows her survival was impossible, he can’t help wanting to fan the tiny flicker of hope the email has kindled.

With the Pleasures away for a few days. Alex uses his ingenuity and training to travel alone to Cairo and return to the ruined fortress at Siwa. There he finds a single word scratched into the wall beneath a bed in one of the rooms used as a cell. The name Grimaldi means nothing to Alex but he’s determined to find out more, and embarks on a dangerous pursuit that brings him back into contact with MI6 and Mrs Jones, a woman who, despite some reservations, is still ultimately prepared to involve a traumatised teenager in events well above the pay grade of even her best and most experienced agents.

Never Say Die is a stunning return for Alex, with one of the best action sequences I’ve read, naturally involving a desperate escape and a train! Horowitz’s ability to write Alex’s escapades in a thrilling but realistic way is one of the great strengths of this series. Yes, there are Bond-style gadgets and ideas that flirt with being over the top, but I never feel like my suspension of disbelief is dangling on a thin piece of frayed string over a precipice, and even if it was, I’m certain that Alex could improvise an escape for me based on nothing more than thin string and a fertile imagination. And, of course, a liberal dose of sarcasm.

Fifteen-year-old Alex has undoubtedly earned a place on the list of fictional characters I’d like to call on if I ever need to be rescued from a tight spot. He’s in good company, rubbing shoulders with Modesty Blaise, Ellen Ripley and Sarah Connor, and I’m not sure there is any higher praise for his exploits than that!