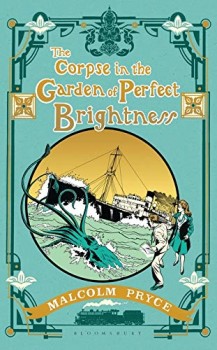 The Corpse in the Garden of Perfect Brightness

Railway detective Jack Wenlock, thrown out of work by the 1947 nationalisation of the industry, searches the Far East for his mother, whom he has always believed dead.

This quirky, surreal, nostalgic and insightful read is the second of railway detective Jack Wenlock’s casebooks. It’s absolutely delightfully crazy – even more so than his debut five years ago in The Case of the Hail Mary Celeste where 23 nuns of the Order of the Sisters of Lacrismi Christi disappear from a special excursion train!

Proud Welshman Malcolm Pryce is a dissident throwback to the ancient bardic tradition – part newscaster, gossip columnist, historian, political and social commentator, poet and romantic novelist. Who else could possibly have created the hugely successful and totally improbable sub-genre of Aberystwyth noir?

His hero Jack Wenlock is the last survivor of the Railway Goslings, a product of one of the eugenics experiments in vogue before and after the First World War. These orphans, born in a converted engine shed at the Weeping Cross Railway Servants’ Orphanage, ‘imprinted’ at birth with the image of a railway engine and trained as single-minded, elite detectives, they were brought up to regard the Great Western Railway as their only family.

The nationalisation of the four big rail companies in 1947 meant that the family ceased to exist overnight. Jack is unemployed, near penniless and with his new bride, the delightful walking slang dictionary Jenny to support. At the same time he’s hiding from the assassins of the ultra-nationalist organisation Room 42, upset by his knowledge of Royal involvement around the Mary Celeste case, and his prospects look bleak.

Then a letter arrives from a mysterious, but highly connected Cornish aristocrat revealing that Jack’s mother, her former maid – long believed dead – may have survived a shipwreck off Java and offering to finance his search providing he finds her missing son who appears to have gone off the rails somewhere in Bangkok, even to the extent of wearing rouge!

Jack seizes the opportunity and he and Jenny board a boat heading east. So far, so improbable. From there the story turns into a magnificently detailed, surreal, eccentric, complex and fascinating mix of history, absurdity, irony, gumshoe novel, an oddly touching love story and savage political condemnation – a pulp fiction Boy’s Own adventure that mixes shades of both PG Wodehouse and Joseph Conrad into the most entertaining of Ripping Yarns.

The trail leads Jack and Jenny to a run-down hotel and a strange assortment of drifters, a spy, an assassin, a deserter, an old soldier, a fading Hollywood movie star and a once famous producer all waiting for the arrival of a missing part for a flying boat which will take them into their own dreams.

It is funny, sad, poignant, nostalgic and romantic, full of the imagery, language and attitudes of the period. Jack, courtly, old-fashioned, naïve, but unafraid and well able to take physical care of himself, regards the world through a filter of fair play, Englishness and manliness. Jenny is a surprisingly modern young woman, a lovely, but occasionally spikey, orchid in a garden of anachronistic male weeds.

Pryce writes beautifully, with style, warmth and humanity, delighting in the language of an era of propaganda and often exaggerated memories. But he also has deeper points to make and he minces no words.

The self-serving machinations of the ‘great and the good’, the worst attitudes and attributes associated with an Empire on which the sun never set, where ‘natives’ were little more than convenient cheap labour and women expected to have no opinions and stay in the background, will strike a familiar chord with modern readers.

Amid this beautifully dated and complex tale of good chaps or rotters, idealists and dreamers, the grounded and the lost, Pryce once again triumphantly fulfils his bardic role – right down to the traditional and totally unexpected final reveal.

This clever, funny and insightful one-off book is quite brilliant.