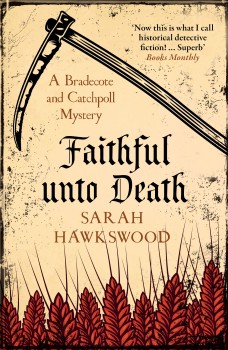 When the Prince of Powys’ messenger fails to reach his English destination, lord sheriff’s men Bradecote, Catchpoll and Walkelin must check a dead man’s identity.

Sarah Hawkswood’s unrivalled research into the dark and mostly unrecorded middle 12th century and her experience with non-fiction military books – her first was a part-history of the Royal Marines – enables her to write in a totally factual yet ever-readable manner about a period less than a century after the Conquest when the only important people were men with swords.

Yet she has enough imagination and ability to be able to switch her focus from the baronial and manorial lords to ordinary people of the towns and villeins in the manors without loss of pace or clarity. Priests and monks, in fact anyone who takes their calling seriously, get a sympathetic hearing in a totally believable interaction between the characters of different classes in a time when class really mattered.

The story is set against the background of civil war between Stephen of Blois, nephew of Henry I, who broke an oath to support the king’s daughter, the Empress Matilda, and seized the English throne. The situation where William de Beauchamp, lord sheriff of Worcester, held his office and collected taxes for the king, but was a Matilda sympathiser, was not uncommon, but required some tricky political balance among his household.

When the naked corpse of an unknown man is discovered and a messenger from the Prince of Powys fails to reach Earl Robert, under-sheriff Bradecote, Serjeant Catchpoll and his apprentice Walkelin undertake the dangerous journey into a hostile Wales to see if there is any link between the events.

Piecing together the evidence it appears the corpse is that of the Prince’s missing man. But they also discover that he probably deserved a noose rather than the dagger which killed him. And where is his servant, or the horses they rode?

Retracing his steps leads them to an English manor where everyone – lords and commoners alike – has a lot to hide. With a weak, impotent and sarcastic lord, a neglected wife, a bitter mother and an apparently sickly brother, and retainers and villagers who do not want the truth uncovered, a dark story unfolds and the lord sheriff’s men must unravel a knot where the law may not lead to true justice.

Like the earlier stories, Faithful Unto Death has well-developed characters, not just the leads, but also for new and even peripheral players. It is this interesting and superbly portrayed interaction between the different classes that makes Hawkswood so readable.

At its centre is the constantly developing relationship between the three investigators. Norman and Breton descended under-sheriff Hugh Bradcote, at first given to a young aristocrat’s assumption that rank equals knowledge, is maturing into an almost egalitarian, intelligent and shrewd investigator, although still occasionally prone to allow emotion to overrule logic.

The close-mouthed, irascible, hardcase veteran Catchpoll, now beginning to feel his years, has gradually warmed towards his superior as Bradcote has changed – even adopting some of the tricks which have made the sergeant such a feared law enforcer.

Young former man-at-arms Walkelin, selected as his eventual successor for his sharp intelligence, is growing rapidly into the job, learning to deal with the rigid feudal system and offering shrewd and worthwhile contributions to the investigative process.

As readers will have come to expect, Faithful Unto Death is as much a tale of personalities, relationships and ambitions, crossing ethnic, geographic and class differences, as it is of murder. Hawkswood’s ability to mix humour with the complexities of life and her crisp and descriptive writing will drag her readers deep into this medieval whodunit as she switches between action, reflection, personal feelings, description or even gossip with effortless ease.