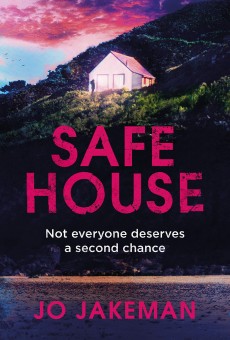 Charlie has a new life to go with her new name. But her past is closing in.

It's the first day of Charlie Miller's life. At least it is, as Charlie Miller. Because until a few days ago, Charlie was Steffi, a convict just released from prison after serving a ten-month sentence for giving her controlling boyfriend a false alibi for the night a woman was murdered. She’s taken various practical courses in prison to keep her busy and find new skills, and has prepared herself for a new life and a second chance.

Now she has arrived in a sleepy Cornish village near St Austell, where her solicitor friend has bought a dilapidated cottage on her behalf. The cottage is, like Charlie, battered and frail. The skills acquired in prison will come into good use to repair her home while giving her emotions time to heal.

Charlie would prefer keeping to herself, but reclusive behaviour would get tongues wagging in the small community. So, when two local women introduce themselves, Charlie swallows hard and holds out the hand of friendship. She even finds an ally in her cantankerous neighbour, Aubrey, who nobody else seems to like.

But someone is watching Charlie. Someone who knows who she really is. And they believe in revenge, not second chances.

Safe House is a then-and-now third person, past tense story told mainly from Steffi/Charlie’s point of view, with interjections from a character called Ben Jarvis, newspaper articles and an unknown person who is clearly out to get revenge.

This thought-provoking story is about the fallout after a naive young woman with low self-esteem who, desperate for love, falls for a control freak, a manipulative charmer. He is someone who makes subtle demands with a threatening undercurrent that only an outsider will sense, not the girl who adores him.

This is the stuff of excellent stories, because this is a hideous reality for many women. And the outcome in this case - a false alibi - then amps up the tension, because the author brings in that other monster to wreak havoc on Steffi’s life, the media. Journalists make certain the public believes Steffi cannot be innocent, that she played a part in the murder of two women. Even though the reader senses she is little more than an abused partner, the media has a field day. And we all know that this happens in real life.

Little wonder Charlie finds herself living in fear and paranoia with the sinister feeling of being watched. A creaking floorboard, a broken safety-catch on a ladder, a shadow at the window, jewellery moved by an unseen hand. These little incidents are beautifully placed and are the teasers that keep the reader interested. Combined with straightforward, senses driven writing, the result is an easy read. It teases the reader with its slow crescendo that beats subliminally behind a curtain of intrigue and a dark atmosphere.
I was, therefore, surprised by the dissatisfying denouement. It is a brouhaha, dish-it-up-in excruciating-detail ending with no twist. It is too convenient and will stretch many readers’ suspensions of disbelief to a high-pitched twanging level. Ben’s role is more plausible and interesting.

However, I love the uncluttered but convincing description and the feeling that I have now visited the little Cornish village. I enjoyed most of the book and the immediacy of this second novel from Jo Jakeman. I’m looking forward to the next one.