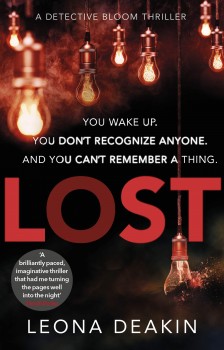 Naval officer Captain Harry Peterson is caught up in a terrorist bomb blast and goes missing for three days. Psychologist August Bloom is called in by Peterson’s girlfriend to investigate. When he’s found, he’s lost all memory of the last few years.

A terrorist bomb at a military ball has devastating consequences for naval captain Harry Peterson. First, he goes missing when the ambulance that collected him from the scene of the attack doesn’t arrive at the same hospital as the other casualties.

Peterson’s girlfriend Karene, who was at the ball with him and saw the extent of his injuries and knew he was alive at the time he was picked up by paramedics, is distraught, and calls on her old friend, psychologist Dr Augusta Bloom to support her. In turn, Augusta involves her friend and sometime colleague Marcus Jameson to help, as he has a security services background that proves useful when liaising with the military.

At first, all enquiries seem to lead nowhere but then three days later, Peterson is found by Karene, at an entirely different hospital, with head injuries that she does not remember him having. Also strange is the fact that only seven ambulances were dispatched by ambulance control to attend the bomb incident, but eight turned up. Karene is adamant that Peterson only has a minor cut to his head after the bomb blast.

Matters worsen when Peterson regains consciousness, with no memory at all of the incident or of Karene. In his mind he’s still married to his ex-wife. He doesn’t remember the fact that she left him, or that he started a relationship with Karene 18 months ago. There is evidence of trauma to his head that might account for this, but Bloom and Jameson are suspicious and believe that the terrorist attack might have been a cover to snatch Peterson for some reason connected with his job.

Lost starts with an intriguing premise, and I was quickly drawn into the mystery surrounding Captain Harry Peterson, but equally quickly, I was almost bounced out of the book by the obvious tension and backstory surrounding Bloom and Jameson. He’s deeply pissed off with her and only came reluctantly to her call. The backstory concerns someone called Seraphine, but there is never more than veiled sniping and disguised hints. It seems Bloom had taken a huge risk with his life and he hasn’t yet forgiven her.

To an extent, I think Lost suffers from second book syndrome where, if you don’t know the background, you feel like an outsider at a private party. I wanted more, but I imagine a large chunk of the backstory was held back out of a desire not to spoiler Leona Deakin’s previous book, Gone.

It’s a delicate balance, and sometimes when it comes to backstory, less is definitely more, but on this occasion I felt that the mysterious – and clearly psychopathic – Seraphine cast too long a shadow over the story which didn’t sit well with the lack of explanation and fell into the tell not show trap. So when she did finally turn up in person, I felt I’d had to take too much on trust.

Despite that, and despite the fact that I found the somewhat distant and egotistical Bloom a difficult character to warm to, I liked Jameson with his easy confidence and competence, and was drawn to Harry Peterson, who seemed the epitome of a decent bloke, and was fascinated by the dynamics around his memory loss, especially when his ex-wife came on the scene. She seemed almost possessive of him, but did make an effort to include Karene, who was trying very hard not to push Peterson into remembering what had grown up between them over the last 18 months.

Once I felt like I’d at least learned enough about Bloom and Jameson to feel comfortable with them, the story moved along at a decent clip and, like them, I wanted to know what it was that that had caused Peterson to be targeted in such a seemingly bizarre way. Seraphine was interesting but by the time the show took over from tell, it was hard not to look on her as a James Bond-style villain.

The stars of the show are very much Peterson’s two teenage children, Sophie and Jake, caught up in events utterly outside their control. In some particularly tense scenes towards the end, Jake proves to be particularly bright and resourceful.

I ended Lost feeling like I finally understood enough about the backstory to want to move forward with these characters into a third book and once I was thoroughly caught up in the story, my reservations finally fell away. The author’s own background in psychology lent an sufficient edge of authority to her writing and character development to ground the book in reality, even when it looked to be veering off into territory where a hefty injection of suspension of disbelief might be needed. Lost amply repays the investment with a strong hook, a good cast and an excellently delivered finale.