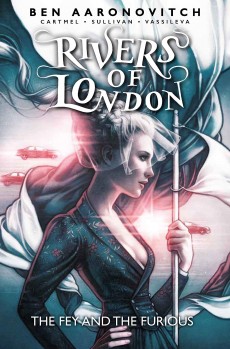 Peter Grant, London copper and magical practitioner, is currently suspended following an operation to apprehend Martin Chorley, aka criminal and killer The Faceless Man, during which Chorley’s accomplice, Lesley May, who also happens to be Peter’s former colleague, escaped.

Peter’s partner, river goddess Beverly Brook, is quite happy to see more of her boyfriend, especially as she’s expecting their first child, but life has a habit of turning complicated when Peter is around …

The Fey and the Furious is the eighth graphic novel in the ever-entertaining Rivers of London series written by Ben Aaronovitch and brought to life in a different but no less engaging form by graphic artist Andrew Cartmel. This book slots into the series after the events of Lies Sleeping, but before both the novella The October Man and False Value, the most recent book in the series.

A handy reader’s guide at the front of the book fittingly shows the relative positions of all the books, novellas and graphic novels by reference to a map of the Thames and provides a useful point of reference to anyone coming to the graphic novels after working their way through the books.

On this occasion, Peter is roped into an off-the-books investigation into illegal street races that are believed to be being used as a cover for a more sinister operation linking the mundane world to the dangerous world of faerie, somewhere Peter has past history with – and it looks like that history is about to come back to bite him.

I’ve been hooked on graphic novels for a long time, starting with Peter O’Donnell’s Modesty Blaise series and progressing onto Teenage Mutant Ninja Turtles and Dave Simms’ surreal Cerebus the Aardvark, amongst others, so when I found that the Rivers of London series was being supplemented with additional stories in the same canon, I was like a rat down a London sewer. Andrew Cartmell’s sharp, clever skills certainly didn’t disappoint. The characters are exactly how I’ve always pictured them in my head, which was an unexpected bonus, even down to my favourite, Peter’s boss, DCI Thomas Nightingale.

In this book, Cartmel’s vision of fairyland has a palpable otherworldly quality and his fey are a very long way from any cutsie Victorian depictions. Here, the fey are as sharp as broken glass, as dangerous as hunting cats and as trustworthy as cornered rats. Peter comes up against an old acquaintance and needs to shut down an unpleasant trade while also trying to extricate himself from fairyland.

The car racing positively leaps off the page, almost literally in places, and the whole graphic novel is stunningly atmospheric, pitching a strong story in vivid artwork and well-chosen, economical text. The series is a joy to read, and artwork of this standard provides a complementary visual delight. If you’re not following the graphic novels, remedy that as soon as possible!

There are the usual bonus features at the end, with more Tales from the Folly and Tales from London, as well as several interesting articles including ones on street racing and stunt driving. These slim volumes pack in a deceptive amount and the production values are superb.