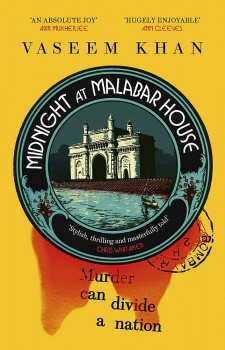 In an India still adjusting to independence, a junior female detective is assigned to investigate the murder of a prominent English diplomat.

Those who have enjoyed the Baby Ganesh Agency novels will be interested to hear of a new series by author Vaseem Khan, again set in Bombay, but at an earlier date. We have a new cast of characters, revolving around Persis Wadia, India’s first female police detective.

The violence and dislocation which accompanied independence is still very much a preoccupation in 1949, and Wadia still has unresolved issues to do with her mother’s death, something her father refuses to discuss. Right from the start, however, it is clear she is a fiercely combative character determined to carve a career despite a general opinion that a woman will not be up to it.

She is on duty for New Year’s Eve at Malabar House, home to one of the city’s less-favoured crime units, when a report is received of the murder of a diplomat, Sir James Herriot. The death occurred in Herriot’s study while a ball he was hosting for the wealthy and well-connected was in progress downstairs.

Wadia eventually establishes several lines of enquiry. Herriot was investigating atrocities during Partition, about which plenty of people have matters to conceal. His assumed wealth is found to be illusory, something his business partner might have resented. His missing trousers, when found, hint at some sexual or romantic liaison which might have been a cause for jealousy.

Progress is complicated by the difficulty in questioning high-status guests at the party. Wadia also wonders why Herriot’s aide Madan Lal approached her unit rather than the better-connected CID. She does, however, get some help from a criminalist seconded from the British Met, ‘Archie’ Blackfinch, a rather diffident character who shows signs of an unreciprocated romantic interest in Persis.

A hidden message found with ticket stubs in one of Herriot’s pockets adds to the interest of the detection story, and eventually Wadia confounds her detractors. Whether their disdain is really sufficient explanation for why such a high-profile case should have been left in the hands of such a junior officer, especially one so little supervised, is a question perhaps best left unasked.

As with Khan’s established Ganesh series, however, the crime under investigation provides a basis for the author to explore wider issues, and there is plenty of material here of interest: the continuing resentment against the British Raj for withholding independence for so long; the mixture of religions and beliefs thrown into a new environment after Partition; and the development of a truly home-grown culture.

The cast do not perhaps have the immediate appeal of Ganesh and his human family which gives that series so much charm, but the interaction between Wadia and Archie seems to have plenty of potential for future adventures.