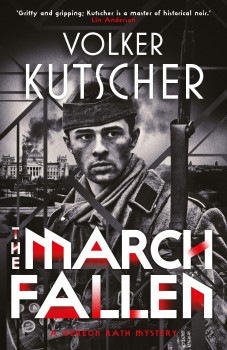 Gereon Rath and his fiancée Charley Ritter tackle a series of murders involving ex-servicemen, as the Nazis consolidate their grip on Germany.

This is the fifth in the Gereon Rath mystery series set in Berlin, which has now reached 1933. Rath’s relationship with his fiancée Charlotte ‘Charley’ Ritter remains stormy, with both being fiercely independent and of decidedly different views on certain aspects of life. But the pair share both a flat and enthusiasm for detective work.

Rath is assigned a case involving the death of one of the many destitute ex-servicemen who survive by begging on the street. A post-mortem shows the death to have been murder committed by an unusual triangular-bladed dagger, and further stabbings follow. It emerges that the victims were connected by a wartime incident where a small group of men uncovered a hidden store of gold in temporarily occupied territory.

Charley is working on an apparently unrelated case, that of a young girl committed to a mental institution after she set fire to a hut used by her father and other impoverished old soldiers. The girl, Hannah, refuses to talk about her motivations, but as the author makes us privy to her interior monologue we know she fears a particular man.

In the background to these events are the elections which promoted the Nazis to power, accompanied by a surge in popular support. The footsoldiers, the SA, are aggressively asserting Nazi priorities, threatening Jewish shop owners and professionals, beating up those suspected of Communist sympathies and encouraging bonfires of books regarded as suspect.

Charley is sensitive to these political developments which she deplores, while Rath is apolitical and for a long time simply ignores them, regarding the Nazis as a temporary phenomenon. He is less sanguine, however, when his boss is summarily replaced with someone more closely aligned with the new masters and work on homicides is suspended so that priority can be given to investigating the ‘Jewish conspiracy’ said to be behind the fire-bombing of the Reichstag.

Despite his formal shift in task he continues to investigate the murders. He remains in contact with Johann Harlow, leaders of one of the Berlin Ringverein, or criminal gangs, that operate in the city. One of Harlow’s friends falls into the hands of the SA and Rath is enlisted to get him out. He does so but only after SA treatment which has to be one of the most shockingly unpleasant episodes I have yet to come across in a crime novel of any sort.

The title of the book is a straightforward translation from the German and is perhaps a little awkward in English. I am happy to say that this is not true of the text generally, with only a minimal number of details which a non-German reader might find puzzling. This is the best I have read in the series so far: detective stories totally immersed in their time and place, re-created brilliantly.