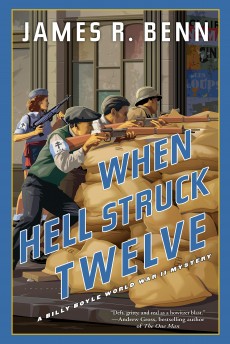 Boston detective Billy Boyle is on the track of a French traitor betraying the Resistance movement in the run-up to the liberation of Paris.

James R Benn’s second world war detective Billy Boyle series has now reached its 14th book. Here, the Boston policeman, vaguely related to Supreme Allied Commander Dwight D Eisenhower, more closely aligned with the IRA-supporters of the Boston-Irish community – Benn manages to introduce England’s ‘oppression’ of his ancestors into every story – is just another comic book, Hollywood B movie, example of how US derring-do, know-how and sheer chutzpah won the war and saved Europe from the Nazi terror.

Almost everything about this book – including the title, a mistranslation of a line from Arthur Rimbaud’s poem Hellish Night – is exaggerated to support that belief. Even the opening, a graphic description of slaughter and horror, concentrates more on Boyle than the sheer bloody-minded heroism of two battle groups of the Polish 1st Armoured Brigade. They held Hill 262, Mont Ormel ridge, the stopper in the geographical bottle of the Falaise Gap in the Calvados country, against retreating elements of the German Army Group B, 7th Army and the Fifth Panzer Army threatened with encirclement by the Allies.

General George Paton did not complete the planned pincer movement, his 3rd Army ordered to halt by his superior Omar Bradley, allowing as many as 50,000 Germans to escape and be reorganised and re-armed in time to slow the Allied advance into the Netherlands and Germany.

Then there’s the question of American ‘intelligence’ which sends a man who barely speaks a word of French to track down a Resistance traitor, codename Atlantik, who is passing Allied plans to the Germans in occupied Paris. His betrayals have led to many deaths, but this time Boyle is ordered to ensure he is successful, because he carries misleading plans designed to detract attention from the Allies’ real intention to bypass the capital and race directly for the German border.

It’s a great plot device, but completely unbelievable! Such resistance as there was – and its importance has always been romantically over-emphasised – in northern France, was largely Communist-dominated.

The idiosyncratic General de Gaulle, leader of the Free French forces, would never have allowed it to provoke a major revolt in Paris, which if successful could have led to a Communist national government. If it failed, the rebellion would be crushed with huge loss of civilian life and the destruction of the capital – an outcome Hitler had already ordered General Dietrich von Choltitz, the city’s governor, to ensure! De Gaulle would have had, for once, the total support of Churchill who had no desire to see a Russian satellite on his doorstep. Roosevelt too would have been doubtful about the value of such a move.

Much is made of divisions within the Resistance – and the splits between the factions of the Franc-Tireurs et Partisans, with Stalinists and Trotskyites re-fighting their differences which surfaced so brutally during defeat in the Spanish civil war.

Again, there is a base of truth. One extremist group operated a secret prison in Paris which continued torturing and killing collaborators and fascists even after the Liberation, but although it makes good copy, it should not be accepted as fact.

Toss in a few compulsory extras – the ‘good’ German; the British Special Operations Executive-run radio station, complete with Boyle’s upper-class English girlfriend, in a posh officer’s brothel; the effects of constant danger and brutality on both the mental and physical health of the combatants; and the use of methamphetamines – the famed Panzer Pills – by both sides; and one wonderful and totally accurate passage debunking the pompous, self-absorbed and drunken Ernest Hemmingway at a meeting of war correspondents at Rambouillet; and you have the perfect combination to appeal to an American audience.

Although the well-written narrative races along, full of mystery and suspense, it may not carry so much appeal for more cynical British readers!