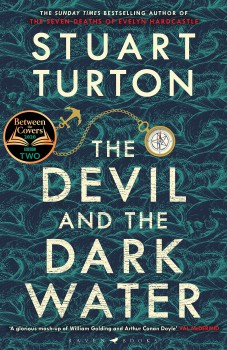 The Devil and the Dark Water

Does the devil haunt a ship bound from Indonesia to Holland? Soldier Arent Hayes must find out.

Stuart Turton burst onto the crime scene with his highly original psychedelic, shocking and fiendish English country house murder mystery The Seven Deaths of Evelyn Hardcastle. He’s managed to follow that with a mind-blowingly twisty, grim and often horrifically frightening sea story based on true events from the early 17th century.

Facts first. A Dutch merchant vessel, the Batavia, was wrecked off the inhospitable and dangerous coast of Western Australia. Survivors were marooned on a small island where one of the officers took over, committing a series of atrocities. One of the soldiers on board led the resistance to this tide of horror and eventually the ship’s captain navigated a rescue mission across thousands of miles of uncharted ocean.

If that’s not dramatic enough, throw in more than a level helping of the occult, stir with the superstitions of the notoriously brutal and uneducated 17th century sailor, season with selections from the less than fragrant history of the United East India Company and garnish with the sheer danger of the eight-month journey from Batavia (modern day Jakarta) to Amsterdam, a route so fraught that ships that deviated from a set course were frequently lost to storms, pirates or disease.

Turton’s story opens with passengers and crew preparing to board the pride of the company fleet, Saardam, that’s carrying spices and other mysterious cargo, for the voyage to Amsterdam. On the dockside a leper appears atop a pile of crates and issues a dreadful warning that the voyage will end in ruin.

The man, who is found to have no tongue, bursts into flames and dies a painful death. But most of the watchers, although chilled by his proclamation, shrug it off as the ramblings of a madman. The more religious worry they have been cursed and when the devil’s mark appears on the ship’s sails a sense of foreboding spreads.

No sooner are they fully out to sea than devilry begins to blight the voyage. The dead leper stalks the decks. Livestock is slaughtered. Three passengers are marked for death. One of them is the detective Samuel Pipps, being transported to Amsterdam to be executed for crimes he may, or may not, have committed. Travelling with him is his loyal bodyguard, Arent Hayes, who is determined to prove his friend innocent.

Heading the passenger list which includes a group of nobles is powerful, ruthless and cruel Jan Haan, the Governor-General of Batavia. Haan, returning to Holland to take up a post on the company board, is a man prepared to countenance ethnic cleansing for his own advancement and, in an age in which even noblewomen have no rights, controls and beats his wife while indulging himself with paid-for mistresses.

Through family connections Arent persuades Haas to free Sammy from his noisome cell, at least for a time at nights, but the detective offers little help, leaving the big soldier who has little faith in his own abilities, despite Sara’s help. Sara, a gifted healer who has had to survive the loss of two sons and now concentrates only on protecting her genius daughter Lia from Haan’s capricious nature, joins forces with Arent when he is tasked with solving the riddle of the threat of the devil ‘Old Tom’ to all on board.

Arent, even aided by Sara, has no faith in his own abilities, having always played second fiddle to Pipps, but he has no choice but to turn detective. As mysterious happenings continue to plague the Saardam – she is stalked by a ghost ship, ‘Old Tom’ appears to talk to passengers and crew alike promising them their heart’s desire for their allegiance, a violent storm threatens to sink them, people die, things disappear, and fear and panic threaten to create total savagery – Arent and Sara struggle to find the truth.

It’s all masterfully done. Arent and Sara make a superb and credible team of amateur sleuths. The crew of murderers and cutthroats, and prophecies of unholy miracles feeding the chaos and mayhem cast doubts on so many it is impossible to pick the real perpetrators.

Turton’s imagination knows no bounds in a spine-chiller that drips with colour and atmosphere. He admits he set out to write a story which would make his readers glad when they look up from the book and find themselves safely at home – and he has certainly succeeded!