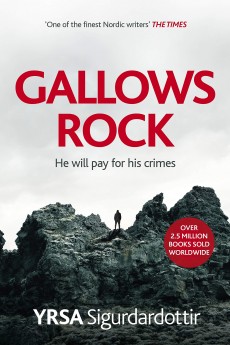 Detective Huldar and child psychologist Freya join forces again to work on a complicated case where a banker is found hanging from Gallows Rock, an ancient execution place, and a mysterious small boy is in the man’s luxurious empty flat.

Gallows Rock (in Victoria Cribb’s translation) is Yrsa Sigurðardóttir’s fourth book in the Freya and Huldar series, and from the very first pages it is clear that the queen of Icelandic crime fiction won’t go easy on the readers, never mind the main characters who again will need to deal with a gruesome and complex case.

The grim yet impressive Gálgaklettur, or the titular Gallows Rock, an old execution site, lies on a jagged bleak lava field outside Reykjavik. It’s not too far from the capital city to discourage hordes of tourists attracted to its horrific history, nor the possible interest of any accidental passers-by. This specific location seems to be perfect for a murder.

There is no clear motive or explanation as to why a body of a man is found hanging from a plank between the split tall black rock formation. The nearby residence of the Prime Minister proves very problematic as the official Chinese delegation has arrived to enjoy the view. The killer’s reasons aside, the crime scene has to be treated with extreme caution and the political pressure quickly make the investigation difficult.

The police quickly dismiss suicide as Helgi, the murdered man, had a note nailed to his chest. He was a banker who had only recently moved back to Iceland, having made a fortune abroad, and was living a quiet civilised life in an ultra-modern luxurious flat. But when a strange child is discovered at his official address, the mystery deepens. The small boy is called Siggi and is very confused and very worried about his mum, doesn’t know where he lives and can’t give any indication as to why he is there. His parents are missing.

Detective Huldar calls for assistance from the child psychologist Freya, and together with other members of the team, under the supervisor of his determined and fearsome boss Erla, start on the painstaking work to make sense of the virtually non-existent pieces of evidence.

The methodical pace of the investigation includes mostly trawling through CCTV tapes and questioning Helgi’s friends and family, amid growing frustration as everybody paints a glowing picture of the victim – rich but oh so kind.

The slow resurfacing of distressing details from his computer indicate that Helgi and his three close friends were involved in recording unaware and often barely conscious women having sex with them. Still, these unsettling video clips do not amount to any passable motive for the nearly ritualistic killing in a well-known tourist spot. Layer after layer of secrets cover the rich men’s activities and as the pressure from the top brass filters down to the lowest ranks at the police station, the tension and desperation grow to catch the killer and to find Siggi’s heavily pregnant mother, a victim of significant long-term domestic abuse.

As always, Sigurðardóttir establishes a convincing initial situation and realistic setting and then creates strong credible protagonists, each displaying their own quirks and habits, and following their own professional and personal paths. It might be a good idea to start with the first novel in the series to get to know the main characters better, although there is enough information here to form opinions about all of them. Their development over the course of each investigation makes them more authentic.

Occasional black humour brings some respite to the otherwise disturbingly dark story about skewed morals and avenging parents, and I can guarantee that you won’t be able to put down Gallows Rock until you reach the shocking end.