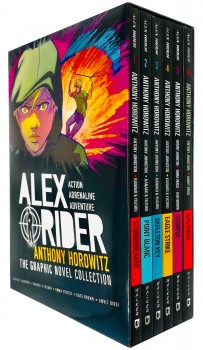 Most youngsters hanker after adventure in their lives, and there are many boys – and girls – who dream of becoming a spy. Alex Rider is the opposite. He dreams of being an ordinary schoolboy and thoroughly resents the Special Operations division of MI6, headed by the ever-unscrupulous Alan Blunt and his deputy, the only marginally less uncaring Mrs Jones. MI6 are reluctant to give up their teenage operative, knowing that Alex is capable of lulling assorted megalomaniacs and terrorists into a false sense of security. After all, who would suspect a 14-year-old boy of being a spy?

This graphic novel collection covers the first five books in the series from Stormbreaker (somewhat outdated now but still an engaging romp) to the delightfully improbably Ark Angel, taking in Point Blanc (now the focus of the new Amazon made for TV series), Skeleton Key, Eagle Strike and Scorpia en route.

The first book in the graphic novel series appeared in 2016 and owes a lot to the not overly successful film of the same name starring Alex Pettyfer in the title role that hit cinemas a decade earlier and didn’t garner sufficient sales at the box office for the hoped-for franchise to take off. Sequences that showed Russian contract killer Yassen Gregorovich hanging upside down out of a helicopter whilst shooting Alex’s uncle are pure film rather than book, and Yassen at times bears more than a passing resemblance to Damian Lewis although thankfully (from my point of view!) that resemblance has diminished by the time we get to Eagle Strike.

There are some other differences, too: Herod Sayle becomes Darrius Sayle and – slightly more inexplicably – John Crawley of MI6 becomes John Crawford, and Alex’s first view of the headquarters of the Special Operations division is also taken purely from the film, with a Hogwarts-style entry through a photo booth in Liverpool Street station, rather than the more prosaic description in the books. I suspect the nods to the film were included for dramatic effect, although the books are exciting enough without the need for further embellishment.

The shortening needed to fit complex stories into a visual format is accomplished with consummate ease and a great deal of style by Antony Johnson who adapts the books to their new format. Each one has the scene setting equivalent of pre-title sequences, used to excellent effect in the first of the books with Alex’s view of his uncle as a boring bank employee interweaved with a dangerous motorbike chase that culminates in his death at Yassen’s hands. The contrast between the two is both stark and poignant, clearly illustrating the lies woven around Alex’s life. The mission briefings are equally well handled, with information being imparted quickly and easily by means of talking heads bracketing action in the form of flashbacks.

All the books are superbly drawn and coloured, but for me sisters Kanako Damerum and Yuzuro Takasaki, who handled the first three, take the crown, just stealing the laurels from later illustrators Emma Vieceli and Kate Brown (Scorpia) and Amrit Birdi (Ark Angel). Where the last two books fall down is in slight but noticeable inconsistencies in the depiction of Alex, not quite capturing the change from full face to profile with the accuracy of Kanako and Yuzuro.

The colouring in all the books is extremely effective, always suiting the setting and mood to perfection. Point Blanc, the sinister school in the Alps, is depicted in cold colours that perfectly complement the chills and thrills, whereas in Skeleton Key, the warmth of Wimbledon in an English summer is brought out through clear blue skies and vivid green grass. And when the action moves to Cuba, there’s a richly beautiful sunset in in vivid orange and striking red, the perfect contrast to a smoky grey sea, followed by an absolutely superb diving sequence in an underwater cave shown in blues and greys, with just a hint of purple.

The books are a visual delight, combining action that positively jumps off the page in all its colourful glory, and taut storytelling that loses very little in its translation from the original books. This is a collection that any Alex Rider fans should snap up. I only hope that Walker Books eventually commission the rest of the books in the series. I would pay very good money indeed to see what an illustrator would do with Russian Roulette, the backstory of Yassen Gregorovich’s teenage years, based off Thomas Levin’s dark portrayal of him in the Amazon series.