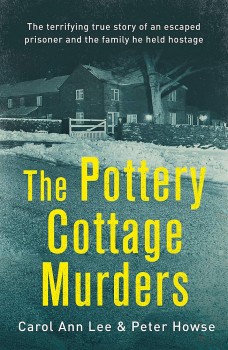 A police manhunt across the snowbound moors. Just one survivor. This is the first definitive account of the horrifying 1977 Pottery Cottage murders that shocked the nation.

More than 40 years after the dreadful events which shocked a nation, this killing of two families in their isolated Derbyshire home has been largely forgotten. Other gruesome serial murderers – Brady and Hindley, Dennis Nilsen, Peter Sutcliffe, the Wests and others – have taken centre stage. But at the time this was big news. The killer Billy Hughes was the first man to be shot dead by police to bring the horrifying story to its close – and the two officers who shot him were judged to have committed justifiable homicide, the first time such a finding was ever made by a British court.

Apart from the unfortunate victims and despite three separate inquiries, few people come out of this story well. Hughes was a lowlife unsuccessful career criminal without redeeming qualities. His offences became increasingly and gratuitously violent and it should have been clear he would kill at some stage. While on remand in Leicester Prison he managed to steal and hide a kitchen knife, undetected by the authorities, and used it to attack two prison officers and escape en route to court.

An early decision by senior police officers that he would head for his hometown of Preston or Blackpool diverted the search from the right area, combining with a heavy snowfall, gave him time to take the Moran family hostages at Pottery Farm.

For three days, Hughes played macabre psychological games with Gill Moran, the only survivor, and her family, keeping them in separate rooms while secretly murdering them one by one.

On several occasions he ordered Gill or her husband Richard to leave the house for provisions – confident they would return without betraying him to protect their loved ones.
The manipulation and mistreatment of the victims, described in some detail, is not an easy read. But this ‘Stockholm Syndrome’ element is hard for us to understand at such a long remove. Hughes’ nature would have made any hostage or siege situation very dangerous, but it is still amazing how anyone could return, in Gill’s case more than once, to a situation that could only ever worsen.

Blizzards hampered a desperate police search, but eventually they learned where Hughes was hiding and closed in on the cottage. A high-speed car chase on icy roads ended with a crash and the killer being shot as he swung a newly sharpened axe at Gill, who was to have been his final victim.

The story of these terrible events is told here by Carol Ann Lee and Peter Howse, one of the founders of TV’s Crimestoppers appeal programme. The former Sub-Divisional Commander of the Buxton South Sub-Division won a Queen’s Commendation for bravery for his actions in first trying to negotiate Gill’s freedom, then grappling with the axeman inside the wrecked car as Hughes attempted to kill them both.

His former role has permitted access to witness statements, crime scene photographs and police reports and he and Lee have made use of these, along with fresh interviews with many directly involved, to produce a fast-paced and truly shocking story with great insight and empathy.

Lee has clearly done plenty of research, and despite a deliberately low-key and flat presentation – almost that of a policeman giving evidence from the dock – such an accumulation of detail helps recreate the terrible claustrophobic atmosphere of the doomed family in their snowbound cottage.

The book is a tour de force – but not one for the squeamish or easily upset!