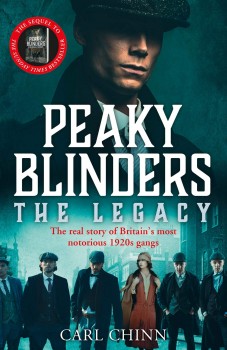 In a follow-up to Peaky Blinders: The Real Story, social historian and broadcaster Carl Chinn lays bare what happened after the disparate collection of Birmingham hoodlums came to prominence – and how they influenced the growth of the structure of criminal gangs as we know them today.

Throughout the 1920s and early 1930s their burgeoning empire of blackmail, protection racketeering and illegal gambling spread across the UK and sparked a series of vicious gang wars as rivals fought to undermine their dominance.

The impact of the burly Brummie Billy Kimber’s Peaky Blinders was such that after the Racecourse War of 1921, when gangs of up to 100-a-side fought pitched battles on courses or in the streets, the then Home Secretary was publicly forced into a formal declaration of a war on gangs, changing the laws and demanding far greater action from the police and tougher enforcement by the judiciary – both of whom had partly been sucked into compliance through bribery or threats.

The gangs’ favoured weapon was the cut-throat open razor. Because it had no point it was difficult to cause life-threatening injuries if skilfully used, but at the same time left spectacular and highly visible marks on the victim. But hammers, truncheons, sand-filled socks and increasingly firearms also featured among the weaponry. One of the surprises of Professor Chinn’s meticulously researched book is that how few fatalities were involved despite a fusillade of close-range revolver shots. Despite many of the users having served in the first world war, they must have been dreadful shots!

Chinn is the son and grandson of illegal bookmakers in Birmingham’s tough Sparkbrook area – and the great-grandson of one of the original Peaky Blinders. He believes in the democratisation of history and that everyone – even those from the grim, insanitary Victorian back-to-backs that once disgraced Britain’s second city – has a story to tell.

He tells it without fear or favour. From an almost endless unsavoury list of those involved in slashings, stabbings, clubbing or even simple common illegal dice or coin games to organised threats, blackmail and protection rackets, he leaves nothing out.

Nor as a social historian, does he omit the casual and totally embedded racism and hate of the period. The so-called Italian gangs of Clerkenwell, London’s famous Little Italy, were almost without exception English-born and many had served the country with credit in the 1914-18 war. But that did not stop them being reviled by a xenophobic public and the press as ‘foreigners’ with the largely northern Italian-descended community frequently and erroneously linked to the Sicilian Mafia!

If the Italians were traduced, the Jews, traditionally marginalised and persecuted, became real hate figures. The epithet ‘East End Jew’, widely used in all newspapers, was a synonym for the lowest form of criminal behaviour.

With members of both communities involved in the gambling business – a large number of both legal and illegal bookies were Jewish – it was hardly surprising they should encourage their own gangs, mainly for protection from the marauding Midlanders, who had begun to extend their influence to courses all over the country.

The crux came at the Epsom June meeting in 1921 when a gang from Birmingham attacked a party of largely Leeds-based bookies in the infamous Epsom Road Ambush. More than 100 police, many armed, were deployed to deal with the charabanc load of attackers in the garden of the George and Dragon on nearby Kingston Hill.

Many of those were former peaky blinders associated with the infamous Sheldon family – the inspiration for the Shelbys in the TV series – and it was this incident as much as any other which led to the criminal gang structure as we know it today.

Its main beneficiary was Darby Sabini, depicted on screen as a smartly dressed Italian gangster figure, but in fact the son of an English mother and a father from near Parma, who had begun to emerge from around 1910 as a minder for largely Jewish operated ‘spielers’ or gambling clubs.
Sabini’s operation, which originated as a territorial street-fighting gang, was tightly controlled, largely based on kinship and family, but also included young Jewish toughs and many others of solely English heritage.

A series of street wars against other London gangs saw them pre-eminent in the south and because of their organisation and control – the organised and clever planner Sabini and his family and a close inner circle of friends – force the disorganised Midlanders first into a truce and gradually destroy them, establishing Sabini as Britain’s first recognisable crime boss and ‘celebrity gangster.’

Whether you are a fan of the TV series or not, this is a rigorously researched and documented examination of a period of which the country should be ashamed and which gives the lie to the frothy, over-dramatised and exaggerated screen version.